You are here: Home / Alien Invasion / ARRIVAL – Part 1 of the From The Sky trilogy by David McGowan 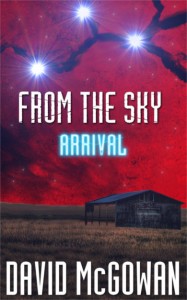 When the ground starts to shake beneath their feet…
When the noises crash through the skies above their heads…
When the giant UFOs appear and send down their beams, their terrible beams…

Camberway is rocked to its very foundations, as a series of bizarre events changes all of their lives, forever.

What will become of Camberway, and the people who call it home?

Will anyone survive? Why are the giant UFOs here? what do they want?

What Inspired You to Write Your Book?
I was inspired by an image of a group of characters wandering through a tall California pine forest, afraid that people they meet could be human or alien. I’ve always been a huge Spielberg fan and Stephen King fan, and From The Sky is a combination of how King crafts a community and places them in peril to see how they will react and how they will get out of said peril, and the huge suspense and drama that permeates Spielberg’s works (Taken, Falling Skies etc.).

How is writing SciFi different from other genres?
The science fiction writer’s imagination must always constantly grasp a little further, past the place where regular authors reach, to find something a little out of the ordinary and original. But all authors must keep their reader guessing, and writing science fiction opens up any possibility you can think of. It’s a fantastic genre with literally a universe of possibilities!

How Did You Come up With Your Characters?
My characters lived inside my head for a number of years before finding their place in From The Sky. They traveled everywhere with me, gradually becoming more fully formed. I think memorable characters is one of the most crucial things to making a book a success. I want you to remember mine long after you’ve left their journey.

About the Author:
David McGowan is 36 years old. He lives in Liverpool in the United Kingdom. He holds a degree in English language and literature from the University of Liverpool, and has read from the medieval to the futuristic. His favorite novel is Catch 22 by Joseph Heller, but his favorite author is Stephen King. His debut novel, The Hunter Inside, is a psychological suspense thriller with a supernatural twist which has given readers worldwide trouble sleeping and nightmares when they finally do.

David is a self-published author, creating his own book covers, trailers and handling all aspects of publishing and social media and marketing. He loves to connect with readers through his website, Twitter, Facebook and various other methods.