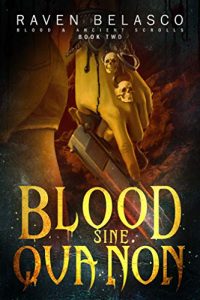 Covered in blood, a knife in one hand and a gun in the other. This rescue attempt has gone terribly wrong.

I was finally getting used to life among the am’r (the name vampires use for themselves) in Romania, archiving a library of ancient texts, learning how to fight, and having lots of quality time with Sandu—who used to go by the name Dracula—perhaps you’ve heard of him?

But then the dreams started. Bagamil, the maker of Sandu (and, ahem, also my lover—life has gotten a lot more exciting recently), was supposed to be on a mission to the am’r of South America, but he has been missing for months now, and those nightmares tell me that something is terribly wrong.

So Sandu made rescue plans, and I insisted on coming along to help. But now I’ve been separated from all the am’r who are our allies, and I’m trapped in a booby-trapped cave system down at the bottom of the world, chased by enemy vampires with knives and guns—not fair!

And I have two problems even on top of that! First, I’m now part-am’r, which makes me smell even more delicious to them, and secondly, well, there seems to be even more bad guys than expected down here, and they all seem to be holding some deep grudges against both Sandu and Bagamil. And they want revenge right now.

How can I find my beloveds without falling into a trap or being taken captive by the hangry bad guys? Once we’re all together again, how do we figure some way out of all of this? If I’ve learned anything in my time amongst the am’r, it’s only going to be by fighting our way out….

Blood Sine Qua Non is the second book in a brand new, dark urban fantasy series mixing horror, history, and blood-soaked romance featuring a snarky librarian heroine and a sensual but complex hero in the story of an adventure like no other, with thrilling plot-twists and characters faced with “personal growth or death.” Ranging from Romania through gorgeous settings in Buenos Aires and Tierra del Fuego, get caught up in the clashes of personality and chaotic melees, fight for love with guns, knives, and the ultimate weapon against vampires: fire.

Author Bio:
Raven Belasco has been fascinated by vampires since she was 12 years old. You probably shouldn’t let 12-year-olds read Stoker’s Dracula, but Raven grew up in a house where, if she could get the book off the shelf, she could read it. Anyway, the bloody seeds were planted both for her to become a fan of the paranormal, and a verbose writer. 😉

Raven also grew up in a small town in Massachusetts, with her backyard mostly comprised of a cemetery filled with graves ranging from the late 1600s through 1800s. If spending your childhood playing on old graves doesn’t prepare you for a career writing about the (un)dead, then probably nothing will.

Continuing in this vein (puns are not optional; sorry–not sorry!) Raven danced and performed for a number of years at the (in)famous ManRay nightclub in Cambridge. In college, she discovered that the nickname bestowed upon her on campus was Queen of the Children of the Night. She was not dismayed by this fact.

For someone who spends so much of her time thinking about blood and violent deaths, Raven actually likes a lot of very life-affirming things: long walks with her dog in the woods, cooking and baking, and yoga. Just to keep things spooky, she still loves heading out to the local goth night at the club for dancing to songs about vampires and other things that go bumpa-bumpa-bumpa in the night.

Raven writes not just for her own pleasure, but to make books that give any-and-everybody an enjoyable escape, and to delight fellow geeks with weird historical details and multi-level puns. She wants to pay forward the joy that books have brought her through tough times or otherwise boring waiting-rooms. Please enjoy her words–and feel free to write in and let her know, or ask questions.

Fans are the bestest!