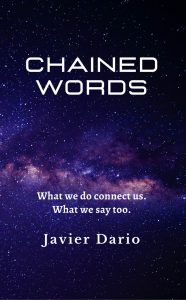 The author plunges us into a world of complex relationships between artificial intelligences, humans and why not other species, showing how far the rights and duties of living beings and robots go.

What is it that connects one intelligence with another?
What is being human?
Would a being from another planet have a behavior very different from ours?
And a robot? Without their own intelligence, they would simply be a programmable tool. But when we endow them, the need for free will immediately arises. And in that case, why would they help us?
What would prevent them from seeing us as limited beings? Or maybe this reasoning is wrong, and they would just be another intelligence to deal with.
To what extent do ethics apply if we talk about artificial intelligence?

These and other questions are developed here throughout thirty-five short stories.

What Inspired You to Write Your Book?
With the common thread of how we relate between human beings, this book extends this idea to show how we would relate to other types of beings, be they intelligent robots, or extraterrestrials. Perhaps the reader discovers that no matter where he lives, the intelligence of each is not so different from that of the rest.

How is writing Science Fiction different from other genres?
I like writing science fiction because I like to fantasize about new worlds and because of my engineering knowledge.

How Did You Come up With Your Characters?
This is a question that is easy to answer. The characters come from many sources: situations lived by me, from scenes seen, from anecdotes they told me. IF I observe a person in a situation that strikes me, I generally imagine him as one of my characters, or as a facet of a character.
Other times, when thinking about the story, the characters are formed almost by themselves. A character from one of my last stories, I took it from an elevator ride. It's that easy.

She has been working there for several years, a burial company. Luckily for them, the business flourished more and more. The increase in population, the latest epidemics of undecipherable viruses, and the neglect of people increasingly ignorant of their own health, made customers abound.
She thought she had seen everything in this business. Until now.
She looked back at the impersonal entity that stood before her, waiting for an answer. Undeterred, with the sole purpose of accomplishing his task, he looked her straight in the eye.
It was true that he did not present a threatening attitude, although it was not very reassuring either. Her expressionless face, devoid of both gestures and eyelids, did not show many feelings, where it was common to see people with sad faces or even crying. However, the inquirer did not flinch.
It was just waiting for an answer.
– Here is a certain Leonardo, a relative of a relative who died today. I don't know if it's the one you are looking for …
– Leonardo Spirro, son of Tadeo Spirro, person who died today at 10:04 AM in this same city.
The receptionist looked at it again, not sure what to say:
– Hey, yes, here it is on the list of the day. They are in room 9.
– Thank you very much. With your permission.
The being turned and walked into the short hallway. Everyone looked at him as he passed, with various reactions between familiarity and amazement.
He saw the sign, with a number 9 somewhat worn. That was the room. He entered with slow and careful movements, perhaps as a sign of respect for the place where he was.
Everyone turned their heads to see him. The few lights in the room were reflected in its metal limbs.
He quickly identified the face of the man he was looking for. He approached and stopped before him. He waited for him to raise his head, and when he looked at him, he said:
– Good evening, Mr. Leonardo. We are very sorry for the sad event that has happened to your father today. We have great affection for you, and for your father by extension. For which we offer our sincerest condolences, in these moments so intense that he has had to live.
Leonardo were amazed. He looked at the being, and did not finish understanding what he was saying.
– Good evening … thank you, but you are … a robot.
– Affirmative, I did not consider it appropriate to mention what is in sight. But if you have any questions, I will gladly try to satisfy them.
– Eh, yes, thank you very much for your condolences. But excuse me, do not take it amiss, I would like you to tell me from whom it comes, because I suppose it is not something typical of … you (he was going to say "your kind" but he did not want to offend).
– Don't worry, it's a very common question. It is true, as you will see I am a ceremonial android, at this moment I carry out condolences at home. The shipping order is generated by your company, where you work. More precisely by his boss and section colleagues. My program indicates that it is not appropriate to detail the senders in this situation.

Modern life, and the successive pandemics on the planet, had been conspiring against the old custom of going to offer condolences when friends' relatives died. Or the relatives themselves, especially if they weren't that close. It was no longer fashionable to go to hug and give comfort, even though it was still something socially frowned upon, and frowned upon if such uncomfortable dates were missed.
Thus, a visionary company, with the rise of robots with increased Artificial Intelligence (AI), began to provide this service, practical and hygienic at the same time. Now a robot was sent to give the typical pat on the back and condolences on the case. If there was not so much confidence, the label was met only verbally, as this time.
This business, too, was flourishing.
Each service brought together many people virtually, so that a single android could represent several relatives of the client. Everyone comply with the formality and nobody was at risk of getting infected: neither did the robot.

The android, after a second of pause, continued speaking:
– I have just sent you a digital card referring to the unfortunate event, to your email address so that, in moments of greater calm, you can see the people undersigned. Some have dedicated the letter to him.
– Well, thanks again. – He was going to say for his condolences, but he contained himself since if something was clear it was that the robot did not feel any sorry for the event. It was just a messenger.
Yet there he was, telling him how sorry he feels.
– Once again, my deepest condolences – pause. If you do not have any additional questions, I will proceed to withdraw – said the robot.
– Please, you can go … – said the man, not sure how to speak to him.
The android turned and walked slowly, head down, through the door. With some sack, from a distance it would look like another human.
When he reached the corner, he regained his posture and normal gait. He consulted his virtual agenda, of course, and traced his route to his next destination.
It was the first service of the night, he had 6 more.
He would have no problem make them all.

About the Author:
Javier Dario was born in La Plata, Argentina in the last millennium. He studied technical studies and has Electronics Engineer grade, focused on data communications. He always had the impulse to write, participated in various competitions until he decided to publish his works in Amazon.
This is the second publication of short stories. He is preparing a science fiction novel.