You are here: Home / Science Fiction / Entanglement by Alina Leonova 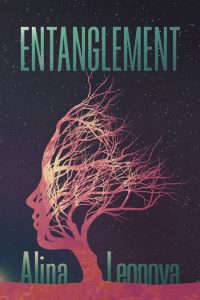 In a world where the distinction between the virtual and the real has faded, and an inexplicable plague is changing the nature, a man is running away from home, as he feels that something strange has happened to his loved one. He will have to change his life, slowly uncovering the truth as he grapples with his doubts about the nature of reality. Can what is happening to him be real, or is he stuck in a simulation?

At the same time, a woman begins to realize that the restrictive community she’s spent her entire life with and the rules she’s been following all along make no sense. She’s had enough of the Master’s cruelty and the mysterious purpose that he’s constantly talking about never explaining it.

This character-focused book explores the relationship between humans and nature and the effects advanced technology has on people’s lives. It dives into the characters’ experiences and follows their adventures as they look for answers, taking the reader on a journey filled with mind-bending concepts, unexpected turns of events and plot twists.

What Inspired You to Write Your Book?
I came up with the idea to write this book as a wedding gift for my husband, that's why a strong bond between the characters is one of the themes explored in it. I also wanted to create a world where the question "Am I in a simulation?" would be reasonable just because we had several conversations about it. Unfortunately, I didn't manage to finish it on time, so my husband got an unfinished draft, which is quite lame as a gift, I admit, but my intentions were romantic.

How is writing Science Fiction different from other genres?
This genre allows the author's imagination to run wild and free wherever it wants. Life on another planet? Human colonies all over the galaxy? The future? Scientific discoveries? No subject is off limits. Explore what you care about, watch where the trends that worry you might lead humanity, criticize any annoying status quo or create a world where everything is completely different. For me, sci-fi is the most fun genre both for reading and writing. It can take me to unimaginable places and make me reevaluate things.

How Did You Come up With Your Characters?
My characters are not based on specific people. Of course, I observe people and their behaviors, try to understand myself and others and use those observations to create relatable and realistic characters that readers can root for. I guess my characters are a mix of everyone I know, but I discover what they are like while writing, and they sometimes surprise me.

About the Author:
I started writing when I was about five, but it didn't occur to me to take it seriously until my early twenties.
I was an activist opposing the regime in my home country Belarus, and later a climate activist in the Extinction Rebellion movement in Poland.
I guess I've always been a dreamer and a rebel.
During the first covid lockdown my husband and I decided to renounce life in the city and became nomads living in close contact with the nature.
After realizing that most of the sci-fi books I've read were written by men, I decided to get to know as many female (and other non-male) authors as possible and started writing a blog, reviewing books by famous as well as indie and self-published authors who aren't men.