You are here: Home / Science Fiction / Fantastic Tales Book One by Bob Price 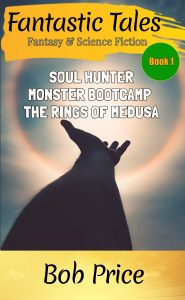 A trio of imaginative tales that will hold your attention to the very end.
Job vacancies in Hell might be worth considering before you arrive. Find out why in Soul Hunter.
Monsters who live among us require training to remain hidden. Monster Boot Camp is where training begins.
Humans colonized the Earth millions of years ago. Arriving on ships from a distant star now long forgotten. However, all that is about to change in The Rings of Medusa.

What Inspired You to Write Your Book?
A passion for Sci-Fi and the desire to challenge my own imagination.

How is writing Science Fiction different from other genres?
That's a very easy question to answer. There are no limitations. Writing most other stories either historical or contemporary attract plenty of limitations if the author wants to hold a reader's interest. Research is essential to make the period chosen match with how their characters and environment impact each other.
However, that does not mean that Sci-Fi authors do not need to research topics in their writing. They require at least a fundamental understanding of what it is they're writing about, after that they can simply lock into their imagination and let it take them where it pleases.

How Did You Come up With Your Characters?
The three different stories in my book depict three very different environments. The first is about Hell so figuring who might be down there isn't hard. I chose a Nazi female from World War Two who seemed to fit with what I wanted her to achieve.
The second concerns monster living among us. They share our appearance but beneath that veneer, they are much more. I focus on a family of vampires and their teenage son who doesn;t realize what he is until he becomes a teen. Taking the perspective that he is shocked to discover his real identity seemed reasonable given that he had grown up among other ordinary kids. It's a kind of coming of age tale.
The third story relates to the concept that humans are themselves aliens who colonized the Earth millions of years ago. Over time all records of our ancient ancestors disappeared. Inevitably, however, friends of our ancestors return initially to collect a protective shield that deterred other aliens from invading Earth. The reason for its removal is that humanity has lost the moral code left behind for them to follow. It's a story about morals and standards and a need for both in any community.

Book Sample
I never wanted to be born a monster. It happened. Heck everything happens for a reason, right? It’s just not obvious when you’re the one caught in the middle. When old enough to appreciate that I was different from the human kids in class I grew paranoid over their spotting the real me. The one hidden just below the surface. The one who sniffed their scent. Tasted their fear. Perceived the speed of their blood flow. Sometimes it was all I could do to resist licking them. Tasting their flesh. I didn’t really understand the urges. They existed. Nothing more. My parents provided scant information. Their intention to wait until I came of age. Only then would they feel comfortable sharing the reality in which the three of us existed. So, until then I could only guess and hide my other self.

About the Author:
Born in the early fifties I travelled a lot across the African continent because of my dad who worked for the British government. Settling back in the UK in the late fifties. I spent forty plus years in public service before retiring to Northern Ireland with my wife and four kids and a collection of animals. At a personal level, I spent more than twenty years researching predictive systems including Tarot cards together with a variety of Asian astrological concepts. Additionally, I trained in Tai Chi Chung eventually becoming an instructor in my own right. The martial art provided me with a glimpse of the energy that surrounds us all on a daily basis and how it was possible to connect with it. Today I no longer practice due to a disability and discovered what I feel is a new vocation with writing.