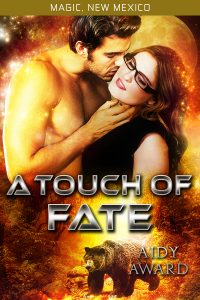 Kady Ayininkizi, your anything but average curvy geek girl, has isolated herself in her brand new tiny house in the mountains because she’s tired of being bullied by the alphaholes of the world.
The spaceship that crashes in her backyard brings the first alien she’s ever encountered, make that the sexiest alien, ever.
When he insists she help him get to some weird place called Magic, New Mexico, she is determined to outwit the men in black in spite of the growing attraction that she knows will never come to fruition.
Black Barrett can’t lead his elite team of shape-shifting Star Rangers on their mission to stop the scourge that is the spectral soul stealers if he can’t get to Magic, New Mexico.
His best bet is the luscious witch who doesn’t seem to know how to use her powers, but has earth’s lawmen running in circles with her sexy-as-hell smarts.
But, when her powers surface and bring the spectrals down around them in force, he must choose.
Save his one true love that the Fates have brought him, or save the universe.

Book Sample and Reviews for A Touch of Fate Here