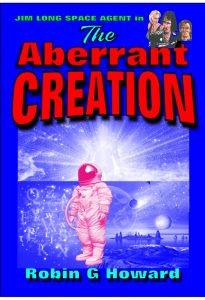 The Aberrant Creation
A journey through space, a dimensional slip, and a dark uncharted region in the galaxy, all add up for big trouble.

Centuries into the future at the Space Agency HQ near the centre of the galaxy, Intergalactic craft 1B sets out to look for reported missing ships. Space Agent Jim Long finds himself in an uncharted section of the universe; forced into immediate action to save the craft and crew.

The spacecraft enters an unknown area that throws everything into a state of chaos. Stranded, and shifting into other dimensions, communication to the outside mysteriously cut, causes confusion and fear. Mysterious deadly foes duplicated appear in different time-shifts ready to cause mayhem and death. Finally, the crew challenged to fight on everything abhorrent to humanity, sexism, racism, and extreme religion, under the control of dark, malevolent spiritual beings called the Nomed.

Will Jim and crew ever escape from this fiendish driven environment? With his usual drollness, wit and fortitude, the Nomed use Jim for their amusement until the situations become critical in a nerve-ending climax.