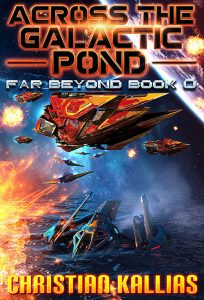 Young Kevin is about to discover we’re not alone in the universe. His first mission: save a gazillion lives.

When young Kevin has a chance encounter with a dying alien, he discovers not only that humans aren’t alone in the universe, but that this encounter propels him into the middle of an intergalactic war.

Now at the frontlines of a massive, far far away war, he’s sent to the last remaining ship of the losing side. The crew of the ship? All dead. His mission is simple: he must save the good guys from certain doom.

From College reject to War Master, Kevin learns he must adapt quickly or billions will die.