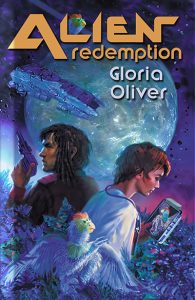 She’s blackmailed into a job. They discover an alien species. Will helping them get her spaced?

Claudia Zimmerman smacks rock bottom then falls off the edge. Used as a scapegoat by her employers, the medical researcher travels to the fringes of known space but is shattered when she becomes a victim of blackmail. Coerced into joining a landing party to an uncharted planet, her thrill at discovering a new intelligent race turns to horror when she realizes they are to be exploited.

Worrying about what they aim to do with them, Claudia tries to guard their well-being while avoiding the captain’s hair-trigger temper. As delivery of the lifeforms draws near, Claudia hatches a desperate plan that could end up getting her spaced.

Realizing that the aliens carry their own secrets, will Claudia’s efforts save all of them or end up dooming the entire human race?

If you like aliens that aren’t what they seem, underdog heroines, and unscrupulous captains, then you’ll love Gloria Oliver’s pulse-pounding tale.