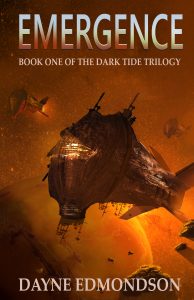 After a long career as a Federation navy captain, Martin Rigsby is looking forward to retirement, but when an urgent distress signal comes in from a human planet near the Milky Way galaxy, his dream of rest and relaxation vanishes in an instant. An assault from Krai’kesh, an ancient enemy, has left the planet in ruins and unable to sustain itself. The long-time soldier must employ every trick in his arsenal to contain the emergence of the enemy and stave off the destruction of humanity.

Emergence is the first installment of a high-octane science fiction series set in the Saga of the Seven Stars fantasy universe. Part science fantasy, part space opera, each book features high technology, fighter pilots, marine and intelligence officers, along with the manipulation of matter, energy, and so much more.