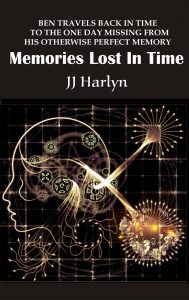 ***FREE Ebook on May 21 & 22***
Ben laughed when his friend Hope told him about her theory on time travel, dismissing the idea as pure fantasy. But, when his family’s financial problems threaten to derail his plans for the future Ben is forced to reconsider the possibilities. Now a junior in a very expensive college the possibility of graduation seemed to be slipping away.

Ben’s photographic memory made him the perfect candidate for Hope’s dangerous experiment. Risking everything, he and his roommate William hatch a plot for Ben to travel back two days into the past where he could acquire the money they both desperately need.
But, when the time-travel experiment goes awry, Ben wakes up in his freshman dorm, just as a naked woman emerges from his roommate’s bed. To make matters worse he’s traveled back to the one day missing from his otherwise perfect memory. Will Ben’s visit to the past alter his current reality? Or, is the “Butterfly Effect” nothing more than a device used by movie makers to create drama? Join Ben on his journey back in time where he must once again face the roommate from hell. And who is that mysterious young woman that will rock his world. A coming of age story told through a unique variation in time-travel. “Memories Lost in Time” is a captivating page turner you won’t be able to put down.

Book Sample and Reviews for Memories Lost in Time Here