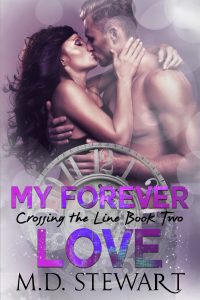 Lisbeth Mohr is a highly trained computer engineer who spent years learning how to read the complex equations for KenSpec Labs. She’s part of a research crew that flies over a time distortion. Afterward, she begins to grieve the absence of a man she’s never met. After waking up with a tattoo she’s never gotten, she asks her boss, Dave Amsted for his help.
Stieg Warner is an Academy Award-winning German Actor and Director who’s been having dreams of an American woman he’s never met. Although he’s never met her, he loves her in a way he’s never experienced and is obsessed with finding her.
But love isn’t the only thing that crosses over the time rip. Something evil has set sights on destroying Lisbeth and her crew.
This book contains a m/f love so epic, even time can’t contain it.
Bonus Story:
Jonas Kirkhart is Stieg’s bodyguard and best friend. They’ve grown up together, surviving German Reunification, fighting back to back. But as a gay man, he’s given up on finding love because of society’s judgmental attitude.
Being MedTech Aaron knows Jonas is his mate the moment they meet, but he’s been directed by his home planet to mate a female and produce children.
How can the men be together and still fulfill the edict passed by Aaron’s government?
This story contains a m/m love story that evolves into a m/m/f relationship.

Book Sample and Reviews for My Forever Love Here