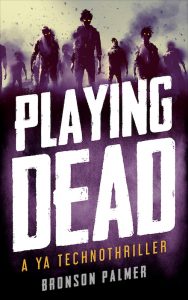 In the halls of Andrew Jackson High School, Jenaiya is a nobody. Less than a nobody. She’s practically invisible. An awkward, shy freshman, she very rarely gets any attention at all, unless she’s being bullied. In short, she’s not anyone’s idea of a hero.

But in ‘Age of Z,’ a post-apocalyptic multiplayer zombie game, she’s a gun-wielding, fast-talking GOD. She’s one of the top ten players in the online dystopia, and she doesn’t suffer fools lightly. It’s just the way she plays, and she likes it that way.

However, when the game gets overrun by trolls and n00bs who threaten to destroy the game by turning it into yet another online shooter, Jenaiya cannot sit still and let that happen. The very existence of the game is on the line, as people leave in droves, and she gathers a rag-tag group of players to fight back against this new kind of ‘brainless’ horde. They have wildly different personalities but one goal: rid the game of the real monsters.

Jenaiya will have to outsmart her enemies, outplay the bullies, and return ‘Age of Z’ to its former glory. Otherwise, it’s game over, and she’ll have to confront the real world that awaits her on the other side of the computer screen.