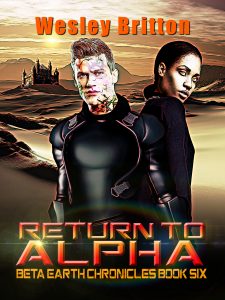 Forty years in the future, planet Earth suffers from horrendous climate changes due to global warming, and survivors are recovering from waves of decimating plagues from uncontrollable biological weapons. A strange spaceship lands on a Jamaican beach carrying six aliens, as Dr. Malcolm Renbourn’s journey reaches a thrilling conclusion.

Renbourn, the only man to have lived on three Earths in the multi-verse, began his astounding flight in The Blind Alien when he was unwittingly transferred to a parallel Earth and forced to adapt to new cultures and a new language. In The Blood of Balnakin, Tribe Renbourn traveled to a new continent, where even stranger adventures awaited. When War Returns caught Tribe Renbourn in a brewing war. A Throne for an Alien found Tribe Renbourn on the run and preparing for a final showdown. The Third Earth forced to them to cross the multi-verse once again, this time as outcasts in a strange world.

Now, how will our future generation react to the unexpected awareness that our planet shares cosmic space with at least two other earths?

Book Sample and Reviews for Return To Alpha Here