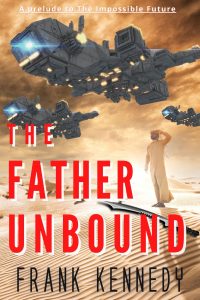 Catch the saga while it’s on sale: Love, revenge, and fatherly sins drive this generational saga as a boy stands hopeless against a thousand-year empire. The Chancellors and their invincible Unification Guard have a grip on Hiebimini. From the age of 7, Trayem Hadeed sees behind the veil of this god-like caste that reigns unchecked over humanity. Ephraim Hollander, whose line dates back to the beginning of the Chancellory three millennia ago, knows the end is near and sets in motion the sunset of his own people. Trayem and Ephraim will lock into a fifty-year struggle as humanity moves toward fulfillment of a prophecy born before humans ever left the cradle of Earth. Nothing will go as anyone plans. For fans of Asimov and Herbert, this space opera transports you to the universe of the Collectorate.

Book Sample and Reviews for The Father Unbound Here