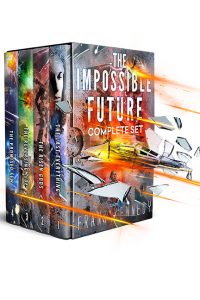 One night in a small town will change two universes in this relentless, action-packed saga.

The clock is running out on Jamie Sheridan, who carries a genetically-engineered time bomb inside him. In eight hours, he will become a god, a monster, or he will die. He fights to survive against all hope, with his best friends Michael Cooper and Samantha Huggins at his side.

Their desperate quest will take them into another universe, where a galactic empire stands on the brink, and the balance of forty worlds is about to be shattered. Destinies will be formed, friends and lovers will face betrayal, the fire of war will grow, and an ancient force will rise.