You are here: Home / Adventure / Featured Book: The Last Everything by Frank Kennedy 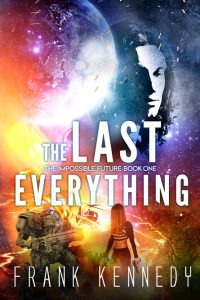 His parents are gone. There’s no one left to trust. His goal? Survive the next eight hours. Then what? He’ll become a god or a monster – or both. His one hope rests in another universe. The action-packed saga The Impossible Future begins as Jamie, along with friends Michael and Sammie, face death, betrayal, and a stunning destiny. Join the chase while the first two books are deeply discounted!

Book Sample and Reviews for The Last Everything Here