You are here: Home / Fantasy / Featured Book: The Nephilim Chronicles: The Rise of the fallen by HB Jackson 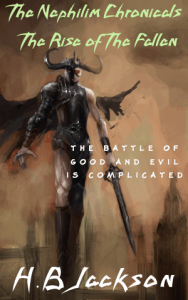 Rimi is the most powerful Nephilim in creation and acts as the hand of God. When God needs something done on earth he calls Rimi. He is the head of God’s secret agency. He has one job, and that is to keep the world stable. He does it by any means necessary.   Thousands of years ago before the great flood and after the war in heaven God assigned a group of angels know as watchers to watch over man kind. These watchers went rouge, fell to earth and began having sex with the women of earth. They created a race of rouge Nephilim who thought they were Gods. Because of this they were imprisoned.   Fast forward to modern times Rimi discovers a plot by a one of the fallen angels in Hell to free the watchers from their long prison. Their plan is to use human souls to start a demon army so that they can remove Lucifer as the head of the Hell council. Rimi knows that this will start a civil war in Hell. The war would spill over to earth and turn earth onto another Hell. Guided by God and the arch angel Michael, Rimi assembles a team and goes all out to prevent the watchers from carrying out their plan.

“Some readers have the misconception that Christian fantasy novels will be staid and boring,” says Jackson, shaking his head. “It couldn’t be further from the truth, especially in this case! Early readers have remarked at how entertaining and evocative the book is, and how intriguing they found Rimi’s journey.”

Book Sample and Reviews for The Nephilim Chronicles: The Rise of the fallen Here