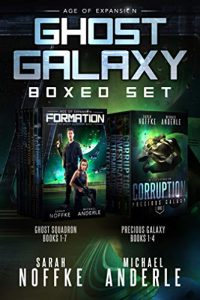 Kill the bad guys. Save the galaxy. All in a hard day’s work.

Get both the Completed Omnibus of Ghost Squadron and Precious Galaxy series in one GIANT omnibus for a stellar price!

After 10 years of wandering the outer rim of the galaxy, Eddie Teach is a man without a purpose. He was one of the toughest pilots in the Federation, but now he’s just a regular guy, getting into bar fights and making a difference wherever he can. It’s not the same as flying a ship and saving colonies, but it’ll have to do.

That is, until General Lance Reynolds tracks Eddie down and offers him a job. There are bad people out there, plotting terrible things, killing innocent people, and destroying entire colonies.

Someone has to stop them.

A new evil lurks in the darkness

After an explosion, the crew of a battlecruiser mysteriously disappears.

After an explosion, the crew of a battlecruiser mysteriously disappears.

Bailey and Lewis, complete strangers, find themselves suddenly onboard the damaged ship. Lewis hasn’t worked a case in years, not since the final one broke his spirit and his bank account. The last thing Bailey remembers is preparing to take down a fugitive on Onyx Station.

Mysteries are harder to solve when there’s no evidence left behind.

Bailey and Lewis don’t know how they got onboard Ricky Bobby or why. However, they quickly learn that whatever was responsible for the explosion and disappearance of the crew is still on the ship.

Monsters are real and what this one can do changes everything.

The new team bands together to discover what happened and how to fight the monster lurking in the bottom of the battlecruiser.

The stakes have never been higher

The Federation cannot be allowed to fall.

Note: If cursing is a problem, then this might not be for you.

Author Bio:
Sarah Noffke, a USA Today and Amazon bestselling author, writes YA and NA science fiction, fantasy, paranormal and urban fantasy. In addition to being an author, she is a mother, podcaster and professor. Noffke holds a Masters of Management and teaches college business/writing courses. Most of her students have no idea that she toils away her hours crafting fictional characters. Noffke’s books are top rated and best-sellers on Amazon. Her books are available in paperback, audio and in Spanish, Portuguese, German and Italian.