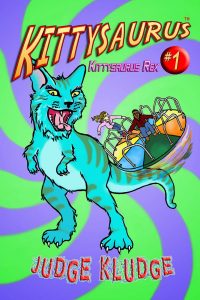 When Clara and Zeke dig up a series of strange fossils from an unknown cat-shaped dinosaur, they expect to make a groundbreaking contribution to the science of Paleontology. Soon they find themselves in the sights of Myles Vulture, a trillionaire with unlimited resources who will stop at nothing to obtain the rare Kittysaurus fossils for his own collection.

Their only hope of success requires a trip 145 million years into the past to a lost period of history called the Zanyzoic where Clara and Zeke run the risk of getting eaten by their own discovery!

What Inspired You to Write Your Book?
The inspiration behind this book was to encourage young girls to take an interest in science.

How Did You Come up With Your Characters?
I wanted to create compelling, likable characters so that children would enjoy reading about their exploits.

About the Author:
You might think that being a judge would be a satisfying job. And for years, the Honorable Judge Kludge would’ve agreed with you. For every criminal he put behind bars, there were ten more criminals to take the last one’s place. He began to have what adults call a ‘mid-life’ crisis. Some people said that it was a very positive sign to have a mid-life crisis at the age of eighty, because that meant he would live to be one hundred and sixty. But Judge Kludge dreamed of leaving his mark. He wanted to accomplish something which would be of inestimable value for humanity. Thus, the Honorable Judge Kludge decided to step down from the bench and pen The Kittysaurus Series.