You are here: Home / YA - Science Fiction / LOST HELIX by Scott Coon 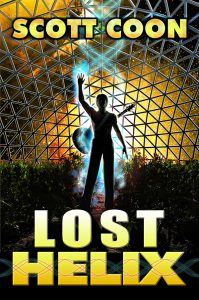 LOST HELIX by Scott Coon, a sci-fi adventure/mystery. Available Now! Stuck on an asteroid mining facility, DJ dreams of writing music. But when his dad goes missing, DJ finds a file containing evidence of a secret war of industrial sabotage, a file encrypted by his dad using DJ’s song Lost Helix. Caught in a crossfire of lies, DJ must find his father and the mother he never knew.

What Inspired You to Write Your Book?
My ideas often come from asking the question, "Yeah, but what next?" Terraforming is a recurring concept in science fiction, like in James S. A. Corey's Leviathan Wakes, but what happens when the planet is done? How does humanity go about populating it? The world of Lost Helix is my answer to that question. Another source of inspiration was the video game Sid Meier's Civilization. Every time I built the domed spaceship bound for Alpha Centauri, I wondered what would become of it after the colonists stripped it for parts and left its remains in orbit. In Lost Helix, I give my science victory colony ships a second life as a farm, feeding the miners of Stone River.

How is writing Science Fiction different from other genres?
Science fiction has the unique ability to predict a realistic future or a very unrealistic one, depending on where you want to go.

How Did You Come up With Your Characters?
I started with a story to tell and built the characters to fit the story. At the same time, I made sure that the world shaped the characters as well. In the localized dystopia of Stone River, your life choices are extremely limited—escape or submit to a life working for the corporation you were born into. Each character has their own skills and goals born of their own backstory.

DJ learned hacking skills from his dad. At the start, he uses them to try to find the mother he never knew. He's brave—at times—and can be resourceful. But he doesn't have the skills he'll need to make a run for it when company agents come after him. Fortunately, his friend Paul has dedicated his life to learning how to illegally travel across the void as a stowaway so he can join a land rush on a newly terraformed world. Basically, he's taught himself Ninja skills so he can become a farmer. Along the way, we meet Maya, who's on the same path as Paul. Before the end, DJ will have to learn something from both of them.

DJ shrugged. “I could get into the shuttle logs, but not from here.” He sat on the couch and brought up the computer interface on his HV.
“What are you doing?”
“They care more about their files than my dad,” DJ snarled, “so I’m finding out what they cared so much about…”
He wrote and ran an audit program that would list the apartment’s files by size and date. As it ran, he started writing another, a more analytical program, but the first program completed before he could, filling the air with an esoteric matrix. DJ stopped typing. “I think I already found something.”
“What?”
“Look.” DJ enlarged a grid of colored blocks tagged with dates, sizes, and other details.
Paul cocked his head. “And I’m looking at…?”
“This block here.” DJ zoomed in. “This was a big, old file. You can tell by…uh…never mind. It’s complicated. But whatever that file was, it was here at least five days ago or it would’ve been purged in the clean.”
Paul shrugged. “I barely passed keyboarding, so whatever you say, buddy.”
DJ leaned back on the couch and stared off into his own thoughts. “Someone deleted a big file that was at least twelve years old. And it was hidden inside a maze of folders.”
Paul dropped beside DJ on the couch. “You think it was them?”
DJ rubbed his eyes. “I don’t know. It could have been them or my dad.”
“Can you get the file back?”
“No. Those jerks deleted the whole restore folder. There had to have been something in there or they wouldn’t have done it.” DJ drove his fingers through his hair. Was this file anything at all? Or was it nothing?
It didn’t feel like nothing.
Paul sat up. “Okay, what’s next? How do we find your dad?”
If DJ wanted to find his dad, he needed to start from the beginning of his dad’s last assignment. “Do you know anything about the shuttle bay modules?”
Paul answered with his silly grin.

About the Author:
Scott Coon is an award-winning short story writer and former U.S. Army Intelligence Analyst. He served for six years, including a tour in Kuwait where he received the Joint Service Achievement Award. Now a software developer for a major bank, Scott brings his computer and military experience into his work, along with a sense of spectacle. See his website for links to his published shorts and his papers on the art and business of writing, as well as his debut novel, LOST HELIX.