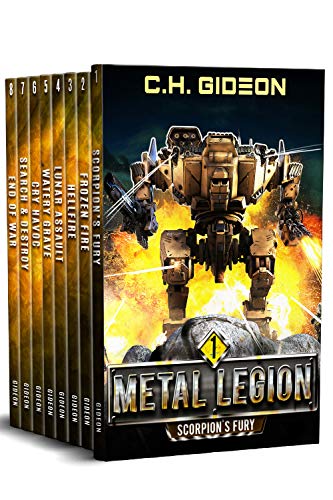 Victory or death! Fight to survive.

The complete set in one package – as much military science fiction adventure as your heart can handle. Aliens. Galactic conquest. Grunts. And firepower. Humanity learns that it’s not the biggest or the baddest in the universe, but that doesn’t stop them.

Who kicks off the battle? Cannon fodder. Soften up the enemy. The Metal Legion. Old mechs crewed by former prisoners with nowhere else to go. They carry the burden. They bear the pain.

But they don’t want to die. “Never fight fair when fighting for your life” The motto of the Metal Legion. They fight to win.

The mechs stand tall, or crawl, or run, or scamper. A dozen different designs, held together by rough welds and sheer willpower. And the soldiers within, like Xi Bao who refuses to give up.

Taking her armor underground, she finds the enemy, in numbers far greater than she was told. Knee deep in the war, her crew gives their old mech new vigor for one last chance at glory.

All 8 books included in this GIANT omnibus:

Author Bio:
Craig Martelle grew up in Iowa, joined the Marine Corps and got to see the best and the worst that the world had to offer. Then earned a law degree. No matter where he went, he always had a book with him. He loves the works of Robert Heinlein, Anne McCaffrey, JRR Tolkien, Robert E. Howard, and so many more. He has been compared to Andre Norton and is humbled by that because she was an incredible author with a huge list of novels to her credit. With every new book, Craig aspires to live up to those authors the readers have compared him to. Through a bizarre series of events, Craig ended up in Fairbanks, Alaska. He never expected to retire to a place where golf courses are only open for four months out of the year. But “it’s all part of the give and take of life.”