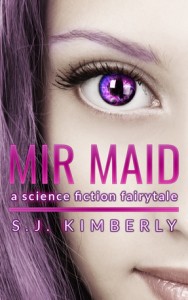 There are secrets known only to Sea Kings, and memories so dark they are buried deep within the earth…

Ana doesn’t look forward to another wedding season with its blaring reminders that she’s a freak who will always be alone. Thanks to a couple of pesky recessive genes that show up every few generations, she’s gifted telepathically and marked from birth for a life of chastity and service as a Maid.

Ana is just one of the galaxy’s misfits that leave their homes in hopes of acceptance into the Alliance Academy. Unfortunately, the nearest Academy is located in Fraternity City, a space station orbiting the water world of Mir. Controlled by clones intent on creating a master race, Fraternity City, a place of shadows where few dare the radiation of the daylight hours, is rumored to be cursed. This story follows four cadets from distant worlds as they find their way in a city filled with pirates, rogues, scientists, and star eyed dreamers.

Can one Maid from Mir make a difference? Will secrets be revealed in time to keep a dark history from being repeated?

What Inspired You to Write Your Book?
I have been developing this universe in one way or another for over ten years. The catalyst for Mir Maid, though, was my grandmother, Carol. She died last year. In the weeks before her death, I had the opportunity to hear once again her stories of joining the Women’s Army Corp during WWII. Some of Ana’s adventures are based on my grandmother’s stories

How is writing SciFi different from other genres?

How Did You Come up With Your Characters?
Some of the characters date even further back, to Star trek fan fics I created as a teenager.

About the Author:
SJ Kimberly has been a pre-med student, a preschool teacher, a missionary, a therapeutic foster parent, and a goat herder. Her greatest accomplishments to date include getting a group of teenagers through the airport in Munich with only moments until their next flight and getting a room full of two year olds to nap.
SJ is a huge fan of Star Trek, Dr. Who, and fun science fiction in general.