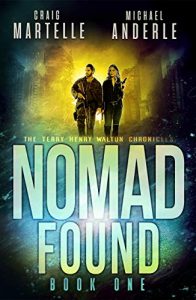 Armageddon. The end of the modern world. Many saved themselves. Others tried to save what was left. Most failed.

After twenty years, he returned. It was time to drag humanity back to civilization.

The first woman he meets offers him water. Maybe there is hope. But then the refuse of humanity comes to take it away. Terry delivers the brutal justice this new world understands.

Terry had lost everything and thought there was nothing left to live for – until now. His mission is nothing less than saving the world from itself.

There is swearing in this book, but in the time before the world’s worst day ever, Terry served in the Marine Corps, and that part will stay with him forever.

Join the Nomad in his journey across the wasteland that used to be America.