You are here: Home / Alien Invasion / Numan Versus Numan by Nicky Blue 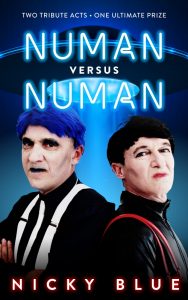 Having been blown away by seeing Gary Numan perform on Top of The Pops in 1979, Five went out and put an ad in the paper to form a tribute band. He named it ‘The Romford Bombers’. They soon went on to dominate the annual Essex battle of the Gary Numan tribute bands. Until last year that is, when ‘The Storm Troopers’ came out of nowhere and stole their crown.

The Bombers’ 56-year-old lead singer will do whatever it takes to win it back. He also has reason to believe The Storm Troopers are pursuing a hidden agenda, and he’s determined to get to the bottom of it.

What Inspired You to Write Your Book?
Having grown up in the 1980's British alternative music scene I am writing a series called, 'Alternative 80s' which puts musicians from that era in bizzare SciFi tales.

How is writing Science Fiction different from other genres?
For me, it is about possibility and the unknown. SciFi is about writing where humanity is going as a species and the technology that is taking them there. It's scope is limitless!

How Did You Come up With Your Characters?
I discovery write them. Ask the muse! I generally like quite dark and twisted characters so always swing in that direction.

I had this thing happen.
I can’t seem to shut it out.
Every time I close my eyes it’s there waiting for me.
It feels like it’s getting worse.
Tina thinks I’m being pathetic.
She’s the one person that should understand.
Thanks for listening, Gary.
I can’t talk about it with anyone else.
I know I can trust you.

About the Author:
Hi, I'm Nicky, I am from Brighton in England. I have a passion for writing dark comedy & sci-fi fiction. I recently worked as a translator on the planet KELT 2Ab in the Andromeda Galaxy. That didn't last very long though as the commute was killing me. Come and join in the fun on my reader's list at: www.nickyblue.com/read