You are here: Home / Adventure / Purr Mission by William Mangieri 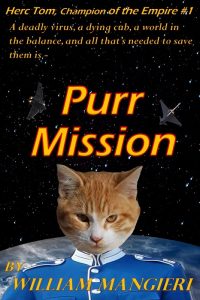 Major Tom’s dander is up. His cub is dying of the Morient Virus, and this cat knows that the Ramses Empire’s sworn enemies are responsible (the deceitful feline Baastards!), but imperial bureaucats have ordered him not to go to their planet to recover the antidote. Well, it’s easier to beg forgiveness than to ask purrmission. Ready for heroism, space, spies, and lives in the balance (and some humor)? Read “Purr Mission.”
Purr Mission is the first story in the “Herc Tom, Champion of the Empire” series, and is FREE everywhere.

What Inspired You to Write Your Book?
Cats. Why did I decide to write a story about cats? I didn’t, really.
Purr-Mission started with a spy being pursued by the enemy. They shoot him down over a distant planet, and although he started out human at the beginning of the writing, by the time he crash-landed and was holed up in the cave, he had taken on some feline characteristics. At that point I was thinking bipedal tigers, but that morphed into the final evolved, bipedal housecats they have become.
Major Tom (yes, I know that name evokes other thoughts) has more at stake than JUST saving the world – he has to save his cub, and I think that gave the story the pull-at-your-heart strength it needed.
Purr-Mission was my seventh completed work, and my first story to receive an Honorable Mention in the Writers of the Future Contest. (I’m sure that positive reception had an influence on my decision to take Purr-Mission from a stand-alone story to the first in a series.)

How is writing Science Fiction different from other genres?
Writing SciFi gives you a lot of latitude for making things up (unless you're writing HARD SciFi, and then you have to at least try to come up with ideas that SCIENCE says MIGHT be POSSIBLE. You do need to have consistent rules for how things work, whether strictly science or not.

How Did You Come up With Your Characters?
My characters tend to wander about, muttering in my mind until a story calls them out that they identify with. As I've said, I didn't realize that Herc Tom was a cat until I'd been writing for a while.

About the Author:
William Mangieri is a blogger, karaoke junkie, former theater student, and recovered wargamer, who spends far too much time inside his own head (he's not alone in there, so don't worry. Or maybe you should…) He grew up (as much as he did) in New England, but now he writes from Texas, where he lives with his wife and the ghost of a nine-pound westie (who still dreams of being a cat.)
"Purr Mission" was the first of his three Honorable Mentions in teh Writers of the Future contest.