You are here: Home / Science Fiction / Rarity from the Hollow by Robert Eggleton 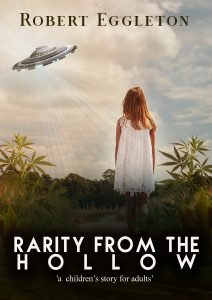 Lacy Dawn’s father relives the never-ending Gulf War, her mother’s teeth are rotting out, and her best friend gets murdered by the meanest daddy on Earth. Life in the hollow is hard. She has one advantage – an android was inserted into her life and is working with her to cure her parents. He wants something in exchange. It’s up to her to save the Universe. Lacy Dawn doesn’t mind saving the universe, but her family and friends come first.

Rarity from the Hollow is adult literary science fiction filled with tragedy, comedy, and satire — a children’s story for adults.

What Inspired You to Write Your Book?
I'm a retired children's psychotherapist with over forty years experience in advocacy. Part of my job was to facilitate group therapy sessions for troubled kids, most of whom had been abused. One day in group, a little girl inspired me to write my first novel by, instead of disclosing the horrors of her abuse, she spoke of her hopes and dreams of a safe and loving family. Lacy Dawn became my protagonist — an empowered victim who saves the universe. Half of author proceeds are donated to help abused children.

How is writing Science Fiction different from other genres?
SciFi includes the element of "what if." This opens the door to creating fantastic adventures by creating the surrounding reality.

How Did You Come up With Your Characters?
My characters are based on people I met in my work as a children's advocate: victims, parents, judges, legislators….

Book Sample
Cozy in Cardboard
Inside her first clubhouse, Lacy Dawn glanced over fifth grade spelling words for
tomorrow’s quiz at school. She already knew all the words in the textbook and most
others in any human language.

Nothing’s more important than an education.

The clubhouse was a cardboard box in the front yard that her grandmother's new
refrigerator had occupied until an hour before. Her father brought it home for her to play in.

The nicest thing he's ever done.

Faith lay beside her with a hand over the words and split fingers to cheat as they
were called off. She lived in the next house up the hollow. Every other Wednesday for the last two months, the supervised child psychologist came to their school, pulled her out of class, and evaluated suspected learning disabilities. Lacy Dawn underlined a word with a fingernail.

All she needs is a little motivation.

Before they had crawled in, Lacy Dawn tapped the upper corner of the box with a
flashlight and proclaimed, "The place of all things possible — especially you passing the fifth grade so we'll be together in the sixth."

Please concentrate, Faith. Try this one.

About the Author:
Robert Eggleton has served as a children's advocate in an impoverished state for over forty years. He is best known locally for his nonfiction: investigative reports about children’s programs, most of which were published by the West Virginia Supreme Court where he worked from 1982 through 1997; nationally distributed models of serving disadvantaged and homeless children in the community instead of in large institutions; research into foster care drift involving children bouncing from one home to the next — never finding a permanent loving family; and statistical reports on the occurrence and correlates of child abuse and delinquency in West Virginia. Dozens of his works have been archived by the West Virginia Division of Culture and History.

Today, he is a recently retired children's psychotherapist from a mental health center in Charleston, West Virginia, where he specialized in helping victims cope with and overcome physical and sexual abuse, and other mental health concerns. Two of Eggleton's poems were published in the 1970s and another won first place in 2015 international poetry competition managed by the WSC Science Fiction & Fantasy Club/WillyCon. His debut novel, Rarity from the Hollow, was named one of five best reads in 2015 by a Codices, has been awarded Gold Medals by Awesome Indies and Readers' Favorite, and has been so well received by prominent book critics and reviewers that it is scheduled for republication by Dog Horn Publishing, a traditional small press, in 2016. Three of Eggleton's short stories have appeared in magazines: Wingspan Quarterly, Beyond Centauri, and Atomjack Science Fiction.

Author proceeds from Eggleton's Lacy Dawn Adventures project have been donated to a child abuse prevention program operated by Children’s Home Society of West Virginia. http://www.childhswv.org/ Robert continues to write adult literary science fiction with new adventures based on a protagonist that is a composite character of children that he met when delivering group therapy services. The overall theme of his stories remains victimization to empowerment.