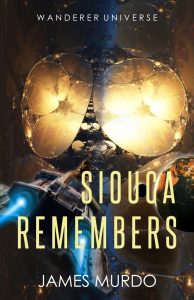 Siouca is a member of the advanced Wanderer civilisation.

The quest to unlock the secrets of interstellar travel leads a Roranian crew on an epic journey across space. Saved by a dying machine-lect, stranded in a failing ship, faced with an ultimate choice. Were they too eager in their attempts to reach the stars?

The fractious Primals are the ancient, all-powerful rulers of the Creatites. Their origins are shrouded in mystery although Storytellers recite their legends. Tallic has recently been granted special abilities by the Barrier Primal that most other Creatites could only dream of, although he has an unexpected encounter with an intruder that changes everything. What secrets have the Primals kept hidden since time began?

Nurilm resides within a decaying temple. One day, she chances upon forbidden knowledge about an enigmatic entity called the ‘Collector’, and an unthinkable battle waged long ago in which the Primals were united.

What does it all mean? And how is it all connected?

What Inspired You to Write Your Book?
Thoughts about the evolution of technologies and other species, the galaxy and the entire universe. Also, other works such as LOTR, Paradise Lost, the Sci-Fi greats…

How is writing Science Fiction different from other genres?
It's up to the author to set the parameters of the universe, and then take the reader along for the ride.

How Did You Come up With Your Characters?
Everything I've ever come across is jumbled up in my mind, which occasionally spits interesting things out.

Book Sample
“You see, our Primal knew that the time had come for the seas to rise, to protect our hive from the False-Primals springing up from the darkness. Their stealing of our resources and false claims to the world had to be stopped. So, as the will of the Primal was seen through and the lands began to vanish, the newly created Barrier class formed a great, glorious, circular cluster around our hive. Their hard bodies pressed against each other and they pushed themselves concentrically out, working as one. Then, as the first wave stopped, another formed behind them, and so on.”

“Storyteller,” one of the Guards interrupted, sounding bored. “Tell us of the ancient battles, and the weapons we once had… the streaks of pure light and the sky-ships, or the–”

About the Author:
James Murdo was born and raised in London, where he still lives. He graduated from university with a Masters degree in Physics, which added fuel to his early love of science fiction. Siouca Remembers is a stand-alone novel within the same (Wanderer) universe as the general Wanderers series.