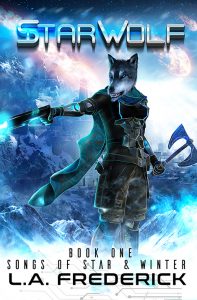 The Council of Worlds is in disarray.

An unknown creature is destroying planets across the galaxy. The fragile peace after the savage Apex Wars between Lion and Tiger is in danger of being broken.

Star Wolf cuts a frustrated figure as his father, ruler of the Wolf planet Lupus, sits by and allows the Council to be taken in by the elaborate schemes of the Tiger’s general.

The Winter Tiger, a legendary warrior, regarded by many to be the most skilled fighter since the Universal Beacon bestowed its gifts upon the galaxy tens of millennia ago. How can Star Wolf be the only creature across the galaxy to see the Winter Tiger for what he truly is?

The Tigers have behaved and adhered to the Council of Worlds rules for twenty years without reproach and yet Star Wolf does not trust the Winter Tiger. His vague childhood memories of the Apex Wars were of a ferocious race, driven to crush and rule the galaxy.

Star Wolf will stop at nothing to uncover the truth behind the mystery planet killer, no matter the cost…

What Inspired You to Write Your Book?
My love of fantasy and space opera and general consumption of both genres.

How is writing Science Fiction different from other genres?
The possibilities are infinite.

How Did You Come up With Your Characters?
My characters are anthropomorphic animals and my initial inspiration came from a 90s cartoon, Captain Bucky O'Hare! From there it spiralled and with a zoologist in the family, it's been a lot of fun exploring animals and their characteristics.

An avid reader from a young age he vividly remembers being drawn into the fabulous world of fiction by the timeless works of Roald Dahl, in particular The Fantastic Mr Fox.

The escapism of fictional worlds is what led him, after a long and winding road through university and various jobs, to the craft of writing.

So when he’s not juggling the million items that day-to-day family life throws at all of us he’s either reading or honing his writing.

His debut series, The Mutant Rain & Mutant Rain Origins, are dark, sci-fi mysteries with dystopian elements thrown in for good measure. “A cool cross between X-Men and Sin City.” As one reader describes the series.

Presently he is working on Songs of Star & Winter, a space opera fantasy, he describes as a cross between Game of Thrones, Star Wars and Captain Bucky O’Hare. Though he fears the reference to an early 90s cartoon series is showing his age…