You are here: Home / YA - Science Fiction / Super Humanity (The Darfur 3 Saga Book 1) by Stephen Alexander 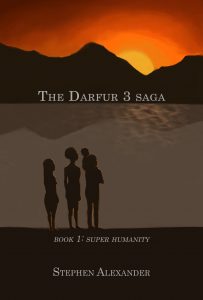 A schism between 2 great superheroes on the battlefield of Tora Bora leads to superhumans fighting in the wars over Darfur & South Sudan. Now it is the year 2012, and the young heroes of that war face their greatest challenge yet: going to America for hero training. Are they ready for America? Is America ready for them? Will they become the heroes America and Darfur need them to be?

Targeted Age Group:: YA and Adult

What Inspired You to Write Your Book?
I’ve read too many comic books and other assorted media in that vein, so I checked my book collection and other resources to see if my basic concept had been done before. In detail; no probably not. In practice there were a few books that touched on the concept of superhumans at war but I didn’t want to completely follow that model. I also needed a war to base the events on. I kept thinking to myself- why should I do this from an American perspective? This one has been done to death so much that I didn’t think I could add anything to the genre. So I chose a perspective that isn’t covered much- African. And from there I chose my war- Darfur/South Sudan independence. It’s a war you don’t see much in the US media, but you do see it.

Book Sample
“From Columbus, Ohio via Geneva Switzerland, our first fighter,” said the male fight announcer over the PA system, “Patrick Jordan, the Indomitable!” The crowd cheered as the red & blue spandex-clad Patrick walked inside, muscles slightly tense. He pulled his face mask down a bit to make it more comfortable. The mask covered his forehead and most of his face, leaving his hair and mouth open. His opponent also walked in.
The announcer began his speech, “From Darkest Africa-“- “That’s the Congo,” interrupted the other male announcer.
“OK…From the wild yellow savannas-” “That’s Kenya, Mel.”
“Damn…From the land of the pyramids-” “That’s Egypt!”
“Okay…notes…(Papers shuffling) From the bountiful Blue-” “White!” “White Nile region of Darfur & South Sudan, our second fighter, Jamir Asad!” “Agar.” “Jamir Agar!”

Jamir walked in wearing the same attire he wore earlier today. When he got to the edge of the circle in the middle of the floor, Patrick was already on one side of it. Jamir took off and tossed his cap to the right, then slid his robe off. His combat uniform consisted of brown combat boots, reddish brown camo fatigues, a matching camo belt with a skull shaped belt buckle, a brown shirt covered by a flexible bulletproof vest. He unbuckled the vest and tossed it to the side of the wall where he tossed the other bits of clothing. His forearms were wrapped in a thin tissue like cloth from wrist to halfway to the elbow.

“You dress like a soldier,” remarked Patrick.
“You dress like a target,” replied Jamir.
“The contestants are on the stage. The protective shields have been raised. No mass or energy can leave the dome and affect the participants,” stated the other male announcer. “Both fighters have agreed to a basic match- no special rules other than the basics. That means no killing, only knockout or surrender.”
Jamir held out his right arm and began unwinding his tissue with his left arm. Patrick’s eyes became slightly wider. He’s doing something freaky. Better fall back he thought. He flew up and far back, coming close to the wall. I can pound his position from here with energy blasts, he thought. Jamir unwound half the tissue then held his arm up and to the right. He held his left hand up by his mouth, two fingers pointing up. He began chanting in a language no one in the audience knew. Thick black smoke began to rise from his right arm, next to where he unfurled the tissue. What the hell…thought Patrick.

Out of nowhere his father, Mr. Wrath, shot straight out of the booth and flew quickly, stopping instantly in front of his son, arms extended. Below the sky box, students’ drinks were almost tipped over by the air displacement his speed burst made. “STOP! My son surrenders!” he shouted at Jamir.
Patrick looked at his father’s back and shouted “What? We just started to fight!”
Patrick’s dad, Mr. Wrath, looked over his shoulder, with a face full of fear and anger, expressed with tightened brows. “YOU IDIOT!” he yelled at his son. “Look behind you!” Patrick turned around. Right behind him, staring him in the face, was a floating grey clad European-style knight in full armor, holding a jousting rod that was aimed right where Patrick’s heart would have been a scant moment earlier.
“Holy crap!” shouted Patrick. He floated backwards, away from it, stopping when he was at his father’s side. Mr. Wrath went back to looking at Jamir.
“Dad! I can fight this guy!” pleaded Patrick, who then whispered, “Please don’t make look weak.”
“Son, shut up and think. He knows our weaknesses,” said Mr. Wrath. He turned his attention back to Jamir, who had lowered his left hand, holding it to his side, fist at the ready. “How did you come to learn we are weak against ‘dark’ magic?” he asked Jamir.
“That’s classified,” replied Jamir.
“You are in no position to deny me, boy!” shouted back Mr. Wrath. He began clenching his fists. Dark energy began ionizing around his fists, making tiny sparkling balls that faded quickly.

“Mr. Wrath!” shouted Karyn through the loudspeaker, “You are not allowed to fight the students! Jamir, do you accept Patrick’s surrender?”
Jamir turned to his right to look at her. “No!” he replied strongly. He turned to look at Patrick. “I’ll make it easier for you. I won’t use magic against you.” The smoke stopped coming from his arm a moment before. Now the tissue was wrapping itself around his arm, to cover the tattoo it exposed. He changed his stance to standing straight up, hands to his sides, and pointing his left side at Patrick.

“You’ll still lose, however,” he pointedly said to Patrick, while looking at Mr. Wrath.
“You cocky little-”
“OK, I’ll accept. Dad, I got this now,” answered Patrick. He nodded at his father, who flew back to the skybox. Patrick landed on the floor about 15 feet from Jamir.

Once Mr. Wrath was seated, Karyn looked at him and said, “Have some confidence in your son.”
“I don’t want my son to die here, Karyn. Your new monster came damn close to killing him,” angrily whispered Mr. Wrath.
“I understand your concern. But remember- you won’t be there for every fight.”
“Not if I can help it.”
“Don’t hamstring your son.”
“Don’t tell me how to raise my boy.”
“Mr. Wrath is supposed to be a nickname, not a philosophy. Settle down.”
“Yeah…deep breath.” He took a deep breath.

Patrick stared at Jamir for half a minute. Jamir did not move in the slightest. The crowd began to murmur. “Ladies and gentlemen, the second act of this fight has begun!” said Mel the announcer over the PA. Finally, Patrick made up his mind.
“Since you’re obviously a skilled fighter, let’s cut the foreplay and go straight to the sex,” suggested Patrick.
“I don’t get your sexual idioms,” said Jamir. “Explain.”
“I’m a lot stronger than you think. Maybe even stronger than my father,” boasted Patrick, who was glaring at Jamir.
“It wouldn’t surprise me. Show me, if you dare,” Jamir’s knees bent slightly, and he raised his hands up slightly.
“It’s your funeral,” he said calmly. He turned to his left and looked up at the skybox where his father and the Director were sitting.
“Father!” he shouted, “Look at how far I’ve come!” Patrick bent his knees and back forward and began to strain. Air began to swirl around him in a clockwise fashion, down to up. He gritted his teeth and squatted down a little bit more. A scant second after that, white light balls began to form around him and get drawn into his chest. This continued for 7 seconds, and he began to grunt and yell. Then, he stood up; hands clenched and held up by his shoulders, and shouted “FLARE!” WA-WUMP! A clear wave of force cracked the pads below his feet and a wall of force went around the dome. RRRRUMBLE! The students shook in their seats from the force impacting the walls. The energy coming into Patrick had increased by 500 percent with Excess amounts flowing invisibly through his head and shoulders. The flow of this ionized dark energy made beige colored gas clouds appear from his chest to his head, flowing away and fading quickly enough to not block his view and others' view of him.

“Yeah! That’s my boy!” shouted Mr. Wrath. The students began to cheer.
“Has Patrick mastered the power of his father?!” loudly inquired the other male announcer, “What will…what the???”
Patrick lowered his outstretched arms. “See, freak? I have learned the same ultimate technique as my father! And you don’t (He turns to face Jamir) what the hell???!! You copycat!”

Jamir was standing straight up, hands by his pockets, fists clenched. The same energy wave and clouds were emanating from him as Patrick. Patrick gasped.
“Are you kidding me? This is one of the first moves I ever learned! It’s surprisingly easy once you learn the basics,” stated Jamir.

About the Author:
Stephen Alexander is a traveling English teacher in East Asia. He can be found in coffee shops and train stations, typing away on a beaten up tablet and broken keyboard. Just look for the craziest guy in the room- odds are, it's him.