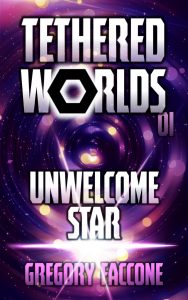 “…one of the most fully imagined sci-fi worlds I have ever experienced outside of Frank Herbert’s genre-defining “Dune” series.” –D.A.Cartier

Jordahk thought he was average. He was wrong. He thought his planet too far from the centuries-old stalemate line to see any action. He was wrong about that too.

To save his world from annexation he must retreat with his eccentric grandfather, seeking help from the farthest planets. But what can stop the domination of mankind’s supreme star-spanning government?

There is an ancient technology with the power to break the conventional–but it can also break the user. And only a special few can wield it. But Jordahk suspects his grandfather knows more than he’s telling…

What Inspired You to Write Your Book?
I was inspired to write stories beyond the common tropes. Stories that are big, with multiple layers, and nuance that goes beyond the ordinary.

How is writing Science Fiction different from other genres?
A sci fi universe requires significant planning. You cannot assume the reader knows anything about a fantastical setting like they might in a novel taking place in a contemporary time.

How Did You Come up With Your Characters?
I wanted characters that were far from cookie cutter. I wanted some of them to be quite noble, yet not without their own foibles and quirks. Regardless of who you are, or where you are in life, there is a character in the Tethered Worlds series in which to relate.

About the Author:
You might think part-time mystery man Gregory Faccone has lived ten lifetimes. He's baked in 130° deserts, and on a dark, rainy night, driven a remote road carpeted with frogs (true story, really).

He performed a long tenure developing electronic entertainment with the biggest names including Warner Bros., Paramount Studios, Electronic Arts and Sony. He created content for popular franchises from science fiction (Star Trek), to superhero (Superman); even a medical drama (ER).

But the written word lasts, and forms a close bond with the reader. So Gregory created a unique science fiction universe. The foundation for the "Tethered Worlds" series took two years to build before the first installment, Unwelcome Star, was written.

Gregory is influenced by Arthur C. Clarke's axiom: "Any sufficiently advanced technology is indistinguishable from magic." Jump into Tethered Worlds and go on an adventure based in the centuries to come. While technology advances, the nature of mankind remains unchanged. It continues to wrestle with flaws, and is preserved through selflessness and nobility.