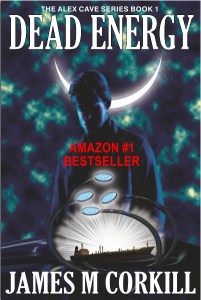 The oil supplies along the west coast of the United States mysteriously start to vanish without a trace, and the only clue is a dollar size crystal, which appears to be alive.

In these action packed science fiction adventures, the series begins with Dead Energy, when geologist Alex Cave is on vacation sailing the waters of the Puget Sound and sees a brilliant flash of light on an oil tanker. When he hears a Mayday, he changes course to help, only to discover there was no explosion and no one onboard, even though all the lifeboats are still secured to the railings.

The next morning, the crew is found frozen on a mountain hundreds of miles inland. Even more unsettling, the tanker left Valdez, Alaska with a full load of heavy crude, but the oil has mysteriously vanished without a trace. He learns the same thing just happened to another tanker in Houston, Texas, and the oil in storage tanks of refineries along the west coast begins to vanish. Panic grips the nation when the lack of fuel keeps basic necessities from reaching the inner cities.

When he begins the investigation, his only clue is a dollar size crystal found in the hold of the empty tanker, which appears to be alive. The investigation leads him to the remnants of a spaceship at Area 51, and a descendent of the first humans to occupy this planet, 180 million years ago. He has no idea what he is about to discover will change the fate of civilization forever.

Can Alex and his friends find a solution for this dire situation? Find out in this epic adventure, by bestselling and award winning author, James M. Corkill.

What Inspired You to Write Your Book?
The oil crisis in the 1990’s

How is writing SciFi different from other genres?
In science fiction, anything is possible.

How Did You Come up With Your Characters?
The protagonist is another version of me, and the other characters are based on various actors and some of the rolls they played.

About the Author:
James M. Corkill is a retired Federal Firefighter from Washington State, USA. He began writing in 1997 and was fortunate to meet a famous horror writer named Hugh B. Cave, who became his mentor.
He served his country in Vietnam, and later became an electronic technician and studied mechanical engineering. While he was an electrician for the Department of Defense, he received thirteen commendations for inventions that were implemented at the Bremerton Naval Shipyard in Washington, including his design for a quad burning apparatus for the Accelerated Weathering Device. He has thirty-six certificates for mechanical and electrical designs used throughout the DOD.
During his thirty-two years as a firefighter, he was an Emergency Medical Technician, an Emergency Vehicle Instructor, Hazmat Technician, Confined Space Rescue Technician, High Altitude Rescue Technician, Structural Firefighter, and Aircraft Firefighter.
He remodeled four fixer-upper homes and built two brand new homes, doing all the electrical, plumbing, carpentry, and finishing work himself. When possible, he does his own vehicle repairs.
His favorite television programs are the Science Channel, the Weather Channel Specials, the History Channel, and Discovery Channel. He subscribes to several science magazines, and he does extensive research for each of his stories to keep them as accurate as possible.
You can contact Mr. Corkill through his website.