You are here: Home / Post-Apocalyptic / The Angel of Death by Scott W. Kimak 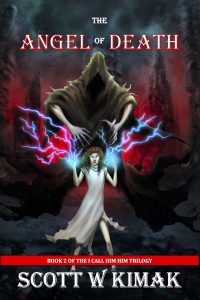 Angelica and her companions rise from the ashes of the Battle of Houston, contemplating their next move.

After their great victory, they should feel at ease, but Angelica’s newfound powers sense a darkness calling to her from the north. An evil awaits the young girl and her friends, ready to test their beliefs. An evil a thousand times more powerful than the Master they had faced.

Can they stand against this dark power, and more importantly, who is the lone warrior that follows their steps from beyond?

Author Scott W Kimak takes you on a breathtaking apocalyptic ride in this second installment of the “I call him HIM” trilogy.

Targeted Age Group:: 14 and up

What Inspired You to Write Your Book?
The many other authors I have read throughout the years.

How is writing Science Fiction different from other genres?
It lets you expand your imagination to new levels.

How Did You Come up With Your Characters?
They're based on real people from my life.

Book Sample
The young girl let out a gasp as the demon raised the inflictor of pain high above its head. The monster brought the instrument down on the older woman’s back, causing her to scream in unbridled agony. Then the demon yanked backward, the sharp hooks tearing into the flesh, ripping long lines of meat from the terrorized victim.
Angelica screamed, “Mother! No!” as she rushed forward. However, only a few feet away from helping her Mom, an invisible wall blocked her way. She slammed her fists against the barrier and cried hysterically over and over, “Stop it! Stop it!”
Angelica felt a chill against her neck as a dark voice slithered in and said, “Isn’t it horrible. How can HE allow this? I never wanted it this way, but HE decided to make this happen. How can you worship someone so cruel? In a world controlled by me, no one would be punished. Everyone would be allowed to do whatever their heart desired.”

About the Author:
Scott Kimak is the bestselling author of the "I call him HIM trilogy. He is also a history teacher and Kung Fu master. He came up with the story “I call him – HIM” when he was a teenager but failed miserably to put pen to paper. It took nearly forty years for him to make a second attempt. This time the words flowed unrestrained. Mr. Kimak lives in Harlingen Texas with the love of his life Diana and their six annoying pets.