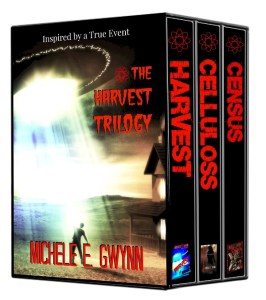 A Horror/Sci-Fi trilogy inspired by a true event. MUFON Report #20633 relayed on November 21, 2009. This sighting was reported 14 years after the fact (sighting occurred on January 6, 1995 in Schertz, Texas). Why did it take so long? As author Michele E. Gwynn states, she was freaked out for all those years. Still, she was inspired to push past the experience and allow it to fuel her writer’s imagination for this chilling series, the last two tales of which take place in and near her hometown of Schertz. What better location to stage an alien invasion…

Harvest – A small town in Oklahoma is invaded overnight by beings not of this world, and they have a message for us all – CHANGE! And they mean it! Nearly every resident disappears leaving behind a bloody stain, a horrific shadow of their humanity. Feeling like the lone survivor to the apocalypse, Dave Forrester must solve the mystery, and fight to save the ones he loves.

Celluloss – A more than fifty year old government secret is out, and it’s angry! A military experiment gone wrong and covered up comes back to exact its revenge on the sleepy suburb of Schertz, Texas, a small city voted by Forbes Magazine as one of the top 40 places to retire. Meanwhile, a city-wide Wellness Program that keeps its citizens healthy might not be exactly what it seems. Everyone who takes the annual free vaccination is unnaturally robust, never getting sick, but the serum is changing them…

Census – The story reaches its epic finale in the next town over. Marion, Texas, population 3,700, is so small, if you blink driving through, you’ll miss it. One area business owner is awarded ‘Tastiest Meats in Town’ by the Chamber of Commerce. John Hester’s family-owned meat market is a staple in the region. Respected by the locals, he is above reproach. When he befriends new resident, retired 9/11 firefighter, Jack Callaghan, things get weird. Stranger still are the disappearing residents, unsolved cold cases Callaghan discovers as he and his wife try to settle in. When they begin receiving veiled threats from the Reverend Harcourt Cane warning them to leave, Jack must find a way to protect himself and his wife, and help the FBI solve the mystery of the fifty-years of federal Census that never budges..despite all the missing

What Inspired You to Write Your Book?
A true event occurred for me on January 6, 1995; an actual UFO sighting in broad daylight that was later reported to MUFON (Mutual UFO Network). The sighting inspired the first book, (Harvest). I describe the entire event in the Forward. From there, the next two tales in the trilogy flowed. Since the sighting happened in my hometown, I kept the second and third books’ stories local as well. Yep, I had aliens invade my city and blow stuff up. It was fun. They still haven’t been able to sell the old Starlite Theater…but you’ll have to read about that in book two.

How is writing SciFi different from other genres?
Science fiction has no perceived boundaries except that the stories must have some basis of truth, some viable tether to reality. The more probable that I can make the story seem, the better the tale. If there is even a small possibility it could happen, well, that’s a terrifying seed that I’ve planted into the brains of my readers.

How Did You Come up With Your Characters?
It’s hard to explain where my characters come from. It’s easiest to say they’re born from the premise of the story. I get an idea, and I run with it. From there, I can actually see people in my mind who are born to the imaginary landscape. I give them names like stray pets, and they begin to reveal their personalities, their hopes, dreams, motivations. Some are good, some are beyond redemption. Actually, the bad ones are the most fun to write.

What the hell? Where is everyone? Dave walked over to the newspaper dispenser and pulled some change out of his pocket. He dropped in seventy-five cents and opened the door. He reached inside and pulled out a paper. Flipping it open, he looked at the front page, anticipating the Sunday news, then realized it was yesterday’s paper. Goddammit. Wasn’t anyone working today?

Dave stood with the paper in his hands, surveying the street. It was quiet, except for the rain. There weren’t any cars, people, or voices to break the steady fall of the rain. He wondered if maybe something had happened that made everyone stay indoors or at home today. Did he miss something important on the radio? The TV? Hell, he wouldn’t know since his satellite signal was out and his car radio seemed to be blown. He blinked twice and rubbed his chin, feeling the stubble he hadn’t shaved off that morning.

Maybe someone was at the video store, he thought. Dave put the old newspaper above his head and made a mad dash across the street. He was pelted with fat raindrops, but at least he managed to keep his hat dry. On the other side of the street, store windows were dark. Loose pamphlets and other debris blew down the street past Dave’s feet as he walked into the cold wind towards the far corner. He tried to keep close to the shops and under their overhangs. In all his years growing up in Farley, Oklahoma, he’d never seen anything like this. Never had he seen this thriving little town so deserted. It was just plain spooky, and he hoped he ran into someone soon because it was really starting to freak him out.

Dave reached the corner and headed for the door to the Hollywood Video. He grasped the door handle and pulled. It opened. Thank you Jesus! Someone’s open! Feeling a smile start to spread across his lips, he put the wet paper down on the floor inside the door and shook himself like a dog shaking off a bath. No “hello” greeted him but hey, it was early, and maybe the kid working this morning was in the back or putting returned movies back on the shelves. Dave walked in and checked the board to see what new movies were out that he could rent. He looked for action flicks. Action flicks were the best, especially old-fashioned sword fights. No new sword fight movies, but Bruce Willis had his umpteenth Die Hard out. That would work. He located the movie and then picked up a coke and some popcorn on the way to the register. He waited

No one came to the checkout. Dave looked around the store and saw no one. “Hey!” He shouted, “Anyone working today or what?” No answer. This is getting annoying, he thought.

“Hey!” his voice echoed around the empty store. Dave leaned over the counter and looked around. He didn’t see much until his eyes lit upon the far corner near the drop box. On the floor was a pair of khaki pants, a blue Hollywood Video shirt, a pair of shoes, and what looked like a watch next to some boxers. Was that a sock poking out from beneath the pant legs? Geez, did the guy working strip off his clothes? Oh! Dave thought, maybe the punk kid was getting some in the back room and he had walked in at an inopportune moment. Inopportune, my ass! He’s on the clock and I’m the damn customer! I’m all for a young guy getting some, but this is just too much!

“Hey! There’s a customer out here. Ahem!” Dave cleared his throat loudly. He was all ready to forgive and forget, especially if the fool turned out to be a real dorky kid. He understood what it was like to be a dorky kid with raging hormones. No dorky kid came running out of the back. No embarrassed teens presented themselves at all. Feeling truly pissed now, he walked to the back room. The door was slightly ajar and he pushed it open with a bang. “Hey kid, I don’t care what you’re doing, but could ya please just check me and then you can get back to it!”

The room was empty. It was a small room with one desk and one chair and a four-line phone sitting on one side. Dave stared in confusion. He walked a little further in, noticed a small employee bathroom to the right, behind the office door. The light was on, but there was no one inside.

This is too much. Where is everyone? He ran a frustrated hand through his hair, knocking his hat off. He caught the hat, and replaced it. Dave set the movie he was holding down on the desk, and turned and walked out back into the store. He kept on walking to the front doors and stepped outside. What he saw stopped him cold. The rain had stopped. It was still quiet as hell, but nearly an inch of snow covered the ground before him. Icicles hung from the store front overhangs. The temperature had dropped well below freezing and Dave felt it start to seep into his bones. He could see his own breath as he shouted “What the hell is going on?”

His words echoed off into the distance and faded away. No answer came. No one looked outside their windows or shouted back at him to shut up. No sound, no wind, no birds, no engines, no voices; nothing moved. Dave felt panic start to set in. He felt cold invading through the thin threads of his jean jacket. He felt scared for the first time since he was a child afraid of what might be under his bed, in the dark. He felt his nose start to run and wiped it on the back of sleeve. Setting off towards his truck, he slipped once on the icy road, before making it safely inside. He sat there looking out at the snow falling and ice forming on his windshield. What should I do? What’s going on? Where is everyone?

The answer lay frozen in the July air; unable to find its voice.

About the Author:
Michele E. Gwynn is an author in San Antonio. She previously wrote for newspapers, magazines, and online websites like Examiner.com (under the categories of Film, Animal Rights, and Sex and Relationships), Alwayz Therro Magazine, FashionErotica Digital, and more.

Gwynn has published several books and has three series currently; the Checkpoint, Berlin Detective Series (crime/detective for 18+); The Harvest Trilogy (Horror/Sci-Fi #UFO series inspired by a true event); and the Angelic Hosts Series (supernatural action/adventure, romance YA & NA). She also has a several stand alones to include both paranormal and mystical romance. The new year will see the publishing of the first full novel in her new series, The Ghosts of Cardiff, Murder in the Vale: The Mystery at Llandaff Cathedral, and the long-anticipated second children’s book, The Cat Who Cooked Spaghetti.

As if that weren’t enough, she has published adult short stories under the pen name Xaviera Snow. (On Amazon.com)

She resides in the small town of Schertz, Texas on the northeast side of San Antonio with her four felines who so graciously allow her to reside in their home.