You are here: Home / Science Fiction / The OOPArt by T.J.Wolf 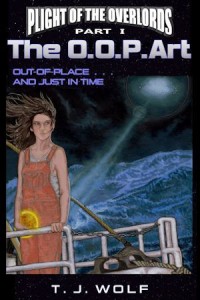 On a secretive night dive off the coast of Maui in 1975, marine biologist Kalinda Earle accidentally discovers an Out-Of-Place-Artifact on the seafloor, triggering an historic tsunami. Rescued along with a cruise ship survivor by a conspiracy-minded ex-Navy SEAL, they embark together on a world-wide quest to discover its origin and purpose, pursued by U.S. Special Forces, agents of a power hungry conglomerate known as THULE, and alien observers–all striving to possess its miraculous technology. From Hawaii to the Philippines to Borneo, their perilous path ultimately leads to the Sarawak Chamber, where Kal and companions, inspired by the words of a Zen Master, escape chaos in the world above, breaching the Hollow Gate, in hopes of returning the OOPArt to its place of origin.

What Inspired You to Write Your Book?
My inspiration comes from the work of great storytellers like Ray Bradbury and Steven Spielberg. Dramatization of extraordinary events that happened to real people best describes the core of my book.

How is writing SciFi different from other genres?
It enables the storyteller to expand a reader’s world, exploring events beyond the norm but every bit as real.

How Did You Come up With Your Characters?
Every character is based on a real person or combination of people from the time period.

Book Sample
Cryptography used codes and ciphers to protect military secrets. At his crypto post, Frye relayed messages full of technical jargon; mostly ship maneuvers, ETA and weather reports. It was his duty to record, decipher and transmit–over and over again. And most of the time, he could handle it by himself.
But not today. The Com Board lit up like a Christmas tree. All frequencies were jammed.
“Gibbs!” he called to an empty doorway leading to the break room.
Somehow, civilian and military signals got crossed. Emergency medical pleas from the city of Hilo overlapped highway patrol chatter. Strange voices cut in, ranting in foreign languages, interspersed with weird electronic noises, clicks, and beeps. He didn’t know where to begin.
“Dammit Gibbs!” he cried. “Where the hell are you? This is no time to–“
Suddenly, bells rang on the closed circuit teletype beside him. The fresh read-out stated:

Frye shuddered.
Hold? Hold what? Search and Rescue? Impossible!
Talk about bad timing. It had to be a joke. The last thing he needed was a reprimand from Colonel Shere for “jeopardizing their mission”. It happened once before. The man was a bulldog in uniform.
Would anybody notice? He couldn’t risk it. A door closed ten feet down the hall. Gibbs was on his way.
Frye stashed the read-out in his pocket.
“Did I miss much?” said his partner, strolling in. A report came in by second teletype, humming along as usual.
“Just a UFO,” he grinned.
Gibbs rolled his eyes. “Like we don’t have enough on our plate!”
They both laughed it off.
Daniel stepped out, to scan the report’s contents. Around 0400 an “unknown” streaked across the Maui sky overnight, moving southeast to northwest, visible for fifty minutes over Haleakala. Caught on film near the volcano, it reappeared, close to thirty minutes at Mauna Kea. No satellite passes fit the observation. Satellites took a couple minutes at most to cross the sky. It would have to be very slow moving or at a very high altitude. It was also impossible for the object to be a meteorite.
He shook his head in disbelief.
The answer had finally come–to a question that tormented him night and day for two years, at least. Ever since he looked up from his rehab bed in November ’73 at Kauai’s Mahelona Hospital on a quiet, windless night.
Would ‘they’ be back?
That’s when a strange, floating object appeared a mile out to sea. Approaching, it seemed about 15-20 feet in diameter, transparent, hundreds of feet off the ground. Enveloped in blue light, it made no sound. Staff members huddled together in fear, on a balcony. Losing altitude, suddenly it passed overhead.
He didn’t know who ‘they’ were or their place of origin. He only knew what he’d seen with his own two eyes.
Later, when questioned, he made the mistake of admitting it.
Colonel Shere was not a patient man. Nor was he open minded. No empathizing with ‘those who had gone before’. No study and debate of ‘other world views’.
The Air Force explained it away.
His superiors could not acknowledge the existence of extraterrestrials. Why? Because they needed an enemy with human weakness and motivation. Aliens would be too ‘unpredictable’–making their leadership style obsolete.
Try as he may, Frye could not forget.
Gibbs stepped out–and the teletype rang again. This time the printout read:

For a moment, he froze. Phrases like “NORAD” with AFB ‘sightings’ in Maine, Michigan, and North Dakota caught his eye. Even Ontario, Canada. It seemed too good to be true. Details included radar contact, with F-106’s scrambled in pursuit. It described objects “like jet aircraft”, with no positive ID.
Danny was in over his head.
Something inside him snapped. Maybe it was the humiliation suffered at hands of Air Force investigators. Maybe it was the nightmares about aliens, or the weird feeling of being “watched” at all times. Fear, self-doubt and questions of personal sanity had plagued him too long. He wanted answers.
And here it was. Something tangible to prove he was not crazy.
He was not about to let it go.
After his shift, climbing on his ’72 Honda CB 450, he knew just what to do. With renewed confidence he set out for Cafe Ono. Not because he was hungry. It was time to step up to the plate and ask Sally out. For a year now, he’d been watching her serve up hot coffee and cherry pie with a smile. Sometimes, she talked about family, pointing to a faded black and white photo on the wall. Her egg-headed brother, back in the states, seldom came around. An engineer by trade, he also had a peculiar hobby that Sally tried to keep under wraps–hunting UFOs.
It just so happened that Egg-head was coming to town. Maybe he could make sense of all this, make people sit up and listen.
He grinned to himself, patting a manila envelope inside his jacket. Things might just work out, after all.

About the Author:
T.J. Wolf spent 19 years in Healthcare before pursuing his love of Science Fiction, conceiving PLIGHT OF THE OVERLORDS as a novel trilogy, set amidst the turbulent upheaval of the 1970s. T.J. grew up in Austintown, Ohio, where his private passions included fantasy art, film-making, special effects make-up and Sci-Fi movies. He lives in Boardman, Ohio with his wife and son and a six-pound Yorkie named Bailey, who keeps the family in line.

Links to Purchase eBooks
Link To Buy The OOPArt On Amazon