You are here: Home / YA - Science Fiction / The Perennial Migration by Dominik Marcel Kirtaime 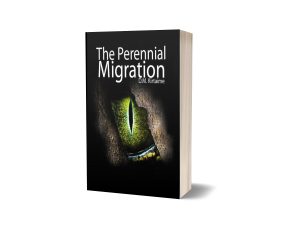 The year is 3010, the human race divided; the new breed living inside the World Administration dome network and outside the older breed. A pandemic, broken out throughout the dome network by a corrosion in the citizens’ wrist chips, is causing the planet to die. Whether the outbreak was accidental or intentional, either way the reptilian race stood to gain from such an apocalypse.

With most metal resources now the property of the World Administration, survival of man, beast and plant will depend on such life forms working together; and the leniency of our galaxy controllers.

What Inspired You to Write Your Book?
The works of David Icke, Dean Koontz, James Herbert and Stephen King.

How is writing Science Fiction different from other genres?
While writing SciFi I found that there is not a stone boundary, allowing fantasy to provide the magic and spice.

How Did You Come up With Your Characters?
I created the character profiles prior to writing my book.

Book Sample
Meanwhile between thirty and forty reptilian soldiers left the tunnel and now surrounded the perimeter of the human trap. During her last confrontation with them True noted that they wielded large clubs, this time they used roughly-made axes and jagged-edged carving knives; issued for the task of butchering. Leo, although a fully trained soldier with combat experience, had not come to terms with the visual contact with these walking lizard beasts. And considering the miserable dilemma, he should now have other things on his mind but instead he starred at the reptilian soldiers; studying them with a strange interest a fellow soldier had.

About the Author:
Kirtaime grew up in the country outskirts of Bristol. After his military career he settled with his family in Germany. Wanting to write fantasy-fiction books was a childhood dream which he only decided to make come true in 2013 with his first book, the award winning 'The Perennial Migration' – A mixture of adventure, conspiracy, legend, space travel all in one pot being stirred by hungry reptilians and cooled by heroes.