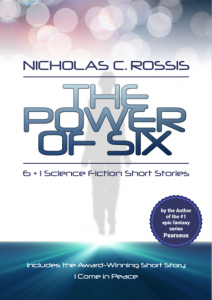 Six science fiction short stories written by the author of Pearseus, the epic fantasy series that has reached #1 on Amazon. This edition includes one extra story, written by Amos M. Carpenter.

Although they seem to be concerned with various themes, there are certain passions that run through them, almost obsessively. What is the nature of reality; digital and corporeal? Is there more to the world than we can see? How far can we trust our senses? What are the consequences of our actions, and is it possible to change them? And if so, would we simply repeat same mistakes, or make new ones?

The anthology includes “I Come in Peace”, an award-winning short story that deals with a tortuous question: how far would man go to alleviate his loneliness? Readers of Pearseus will certainly recognize here the birth of the Orbs.

Humorous and poignant, these short stories are exciting, intriguing and imaginative.

What Inspired You to Write Your Book?
Mostly, my dreams! I’ve been keeping a dream journal since my late teens, and several short stories have sprung out of them. The best of these are included here.

How is writing SciFi different from other genres?
A lot of people think that SciFi is about the future. I beg to differ. SciFi is about the present. It explores mankind’s current situation and extrapolates, pointing a cautionary finger at humanity: “This is what’s going to happen if you continue on your current path.”
What other genre can connect today and tomorrow in such a fascinating way?

About the Author:
Nicholas Rossis was born in 1970 in Athens. Greece. In 1995 he moved to Edinburgh, Scotland, where he received his PhD in Digital Architecture from the University of Edinburgh and taught various publishing courses at Napier University.

In 2000, he moved back to Greece, working as web designer and teaching design and publishing at various colleges and universities. He has written a score of children’s books, numerous award-winning short stories and Pearseus, a dark epic fantasy series with a sci-fi twist.

Since 1995 he has owned Istomedia, a web design company.

Nicholas lives in a forest outside Athens with his lovely wife Electra, beautiful dog and two remarkably silly cats.