You are here: Home / Genetic Engineering / The Refugee by C.A. Hartman 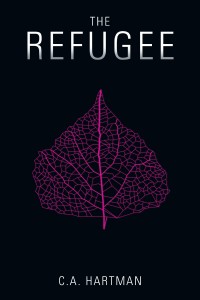 The Starship Cornelia, barely a few months into a 3-year mission to visit the other inhabited Alliance planets, unexpectedly stumbles upon a disabled ship whose 10 alien passengers are found dead. The ship hails from Korvalis–the mysterious non-Alliance planet whose leadership allows no outsider to visit and no citizen to leave. But the tides shift when Cornelia’s Chief Medical Officer and lead geneticist discover that one of the escapees is alive, having survived only due to his superior skill with genetics… and that he seeks asylum from Korvalis.

The Refugee–the first of the Korvali Chronicles series–tells the story of Eshel, the Korvali refugee, and Dr. Catherine Finnegan, the human geneticist who befriends him, as they face the political, scientific, and interpersonal ramifications of Eshel’s living among humans. From censoring of their scientific work to multiple attacks on Eshel, struggles abound… until an alarming incident changes everything.

What Inspired You to Write Your Book?
I’ve always loved science fiction. I read the Dune trilogy in college and started watching Star Trek reruns not long after that, and am a scientist myself. One day, a story came to me that I couldn’t shake. A story turned into a book, and a book into a series.

How is writing SciFi different from other genres?
Sci-fi is challenging in some ways because you have to do considerable research to make the science believable and the world-building interesting. You find yourself thinking, “What sort of climate exists on this alien world? How do its inhabitants communicate, eat, reproduce? How did they evolve?” You have to work through these questions.

How Did You Come up With Your Characters?
Through inspiration. I don’t base them on real people, although I model some of their behavior based on people I’ve known.

About the Author:
C.A. Hartman specializes in writing near future science fiction. Recovering from her years as an academic scientist, she’s refocused her overactive, analytical mind on creating and appreciating thought-provoking stories with memorable characters. She recently released her novel The Refugee, the first book in a series that chronicles the fallout that occurs when an alien scientist escapes from his oppressive, xenophobic planet and comes to live among humans on a starship.

Hartman loves film as well as books and enjoys in-depth film analysis. She strongly prefers films that utilize memorable visual style as well as intelligent characters and storytelling. Bonus points if the film has a good psychological component. Some of her favorites include Inception, Blade Runner, The Matrix, and Hitchcock films. And although she prefers sci-fi, she secretly loves good fantasy and has spent many an hour re-watching The Lord of the Rings trilogy.

A graduate of the University of Colorado (CU), Hartman earned her PhD in Behavioral Genetics and worked as a scientist at CU for 11 years. Living in Denver with her husband, she enjoys hiking, camping, and traveling to faraway places.

Links to Purchase eBooks
Link To Buy The Refugee On Amazon