You are here: Home / Science Fiction / The Simmering Seas by Frank Kennedy 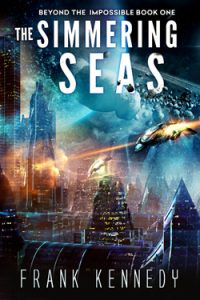 Kara Syung leads a life of privilege among Hokkaido’s elites until her brother whispers his final warning: “They’re going to burn it all. Be a soldier.” His body washes ashore days later, setting Kara on a mission for the truth. Yet powerful forces stand in her way – starting with her family and others who control the planet’s food supply. She has few weapons: A lifelong best friend, a murderous immortal on a crusade of his own, a rogue from an old galactic empire, and a snub-nose laser pistol. Moreover, time and conscience works against her. Does Kara have the strength to stand against everyone and everything she was taught to believe in? Will she find justice for her brother or surrender to a dark conspiracy that threatens Hokkaido and beyond? The first four books of the series are now available, with the remaining five debuting throughout 2022.

What Inspired You to Write Your Book?
The Simmering Seas is set in the Collectorate, which is the universe where almost all my novels are located. It launches a sprawling nine-book saga that spans many worlds (and two universes), pulling together a vast tapestry of unimaginable events. My previous series, The Impossible Future, ends a few years before this one's opening date, but the reader doesn't have to be familiar with the former. You can jump right in. I wrote this series because the Collectorate has 40 worlds and now stands in the aftermath of an empire's fall. There are more than enough stories there to keep me busy for decades.

How Did You Come up With Your Characters?
I only write about humans. Yeah, yeah, aliens are cool. However, I think homo sapiens offers a bottomless well of character types with a myriad of conflicts, inside and out. My characters are high born and low. They're power-brokers, the dispossessed, and the oppressed. They love, they kill, and occasionally they laugh. You know … humans. Just because I set them on worlds many light-years away (and in a different universe) does not change the equation. I must say, however, I do prefer the darker, morally gray set.

Book Sample
She recognized him on a bench seat at the eighth table, alone, sipping soup. Exactly as described: Broad shoulders, lean build, thick but well-manicured black beard, hair pulled back into a flowing, knotted ponytail. He wore a Sak’ne suit – gray with a red sash above the waist. Pinned above his heart: A lancet butterfly dipped in wax. He took the word “native” to its literal extent. This was traditional dress rarely seen, and even then among Freelanders who ascribed to the old ways of Hokki culture, dating back to the Korean Peninsula on Earth. Among this common rabble, he resembled a high priest for a religion long dead. The most and least Hokki in the room.
She tapped Chi-Qua and nodded, pointing to the empty chairs across the table. They took their positions. He did not look up.
“May we join you?” Kara said.
He dipped bread into his soup.
“A timid request,” he said. “You’ll never make a living as dolls.”
“We don’t wish to.”
“Of course not. But if you’re going to enter Mal’s playing dress-up, I recommend you take the part seriously. These people have little use for pretenders. Sit.”
He bit into his bread as they pulled back the chairs and made themselves comfortable. He drew a napkin from his lap and tapped his beard. When he finally made eye contact, his condescending grin suggested he was dealing with idiots.
“Do you know what this is?” He asked, pointing to the soup.
“Should I?” Kara said.
“It’s a bisque of yellow crab with shailin vinegar. An ill-tempered affair. This,” he said, lifting a small glass of green liquor, “is sanque. When the bisque arrives, I stir in a spoonful of this green magic. It cuts the vinegar. Adds sweetness. Sanque is served on the side. How much to add is customer preference, but it is always added. It is tradition. It is authentic. Around these parts, those who don’t know tradition draw long eyes and suspicious hearts.”
“Your point?”
“Dolls never sit across from a client. They choose the closest possible seats. I recommend you fix your error. Now.”

About the Author:
The first time I wrote a science fiction story, I must have been 12. My teacher read it aloud in class. The first time "space warp" was mentioned, the giggles ensued. That did not stop me. I've been lost in science fiction worlds all my life, even while spending 18 years as a journalist and another 18 as an English teacher. Now retired from the latter, I'm authoring books full-time, and I'm especially proud of my current series, Beyond the Impossible. I'm almost 60 now and see nothing but a keyboard and my imagination looming over the distant horizon.