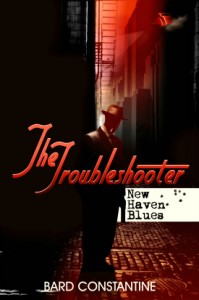 30’s noir meets science fiction in this action packed tale of a man whose job description is shooting trouble.

Mick Trubble has two major problems: a past that he can’t remember, and a price on his head. So when a mysterious dame shows up with a proposition to recover some stolen goods, it’s all in a day’s work for a man with nothing to lose.

But this is New Haven, where nothing is as it seems. In this dystopian melting pot of desperate citizens, the rich dwell above in flying vehicles and bright lights, while the disadvantaged fight over the remains in the gritty streets. There are secrets buried behind sealed doors and the minds of men and women who won’t hesitate to kill in order to protect them.

So when Mick’s case uncovers a conspiracy that threatens the entire populace, he has to rely on his connection, allies, and sheer cunning in order to put the pieces together. He’ll need all the luck he can get to keep from catching a case of the New Haven Blues.

What Inspired You to Write Your Book?
The concept of The Troubleshooter is retro-futurism, or dystopian noir as I call it. It’s taking the grit, slang, vibe and look of the 30s pulp and hard-boiled detective stories and dropping all of that in a Blade Runner styled future. So you get your jazz and bourbon, trench coats and fedoras, dames and gangsters along with your flying cars, synthetic humanoids, and towering cities protected by invisible shielding.

The character of Mick Trubble is taken from familiar stock: that strong, world-weary mug usually seen with a couple of day’s worth of stubble on his chin, a cigarette hanging from his lip, and his eyes shadowed by a fedora. He’s obviously influenced by the literary giants who came before: Philip Marlow, Sam Spade, Mike Hammer. He’s a touch of Bogart, and even a dash of Indiana Jones. Take all of that, shake it and pour it over the rocks of a dystopian backdrop, and you get The Troubleshooter.

How is writing SciFi different from other genres?
I don’t think it is all that different, really. I believe that captivating characters and solid storytelling take precedence no matter what the genre, but sci fi gives me the opportunity to toy with the future, as well as include technology that is more advance than what we know. With The Troubleshooter I purposely keep the tech low-key, but there’s a lot that can be done by simply amping up what we’re already familiar with. I enjoy the challenge of thinking of how our current technology can be expanded, especially in the fields computers and gadgetry.

How Did You Come up With Your Characters?
Originally the story was just a fun experiment, using many of my online writing friends as characters. By the time I’d finished, I realized the potential for the idea as an actual manuscript. Many revisions later the characters had changed and became more developed, inspired by the old noir films featuring cool dames, slick gangsters, and rugged private eyes. The fun was taking that old stock and revamping it for a dystopian setting while retaining the slang and grit of their original archetypes.

Book Sample
As the tires gripped the wet asphalt, I wondered how I was gonna get through my current dilemma without getting clipped in the process. I tipped my flask back and let that Wild Turkey flutter. It was the hazy time of day right before evening when the sun paints the sky different shades of red. I didn’t like it. Reminded me too much of blood.
Poddar noticed my actions and frowned. “Isn’t this going to be hard enough without drinking? I know this heap is on autodrive, but eventually you’re going to have to get out. Being able to stand up straight would be helpful.”
“Listen Ace, if I wanted to be nagged to death I would’ve gotten married. Drinking is what real men do to get in the mood for action. I’m pretty sure you wouldn’t know a thing about that. So howzabout you close your head and keep your eyes peeled. I think we caught a tail. Maxine?”
Taking evasive action, Mr. Trubble.” She shifted and turned hard. We slid sideways and spun 180 degrees into a public parking lot.
“Engaging camouflage mode.”
Her exterior coat altered to a dull rusty color, blending in perfectly with the other derelict wheelers abandoned there. I killed her eyes.
A few moments later another wheeler cruised by, gleaming in its cherry red coat. It was antique styled as well –looked like a Series 70 shell. It was hard to see in the rain, but I could barely make out a blond dame in the passenger seat. I couldn’t see the driver.
“Friends of yours?” At least Poddar had enough sense to keep his voice low.
“Who can tell?”
“Exactly how many people are after you, anyway?”
“How much time ya got?”
Once the wheeler ghosted down the street, Maxine cranked back up. As soon as their taillights vanished, we peeled off the opposite direction.
“Let’s head Downtown, Maxine.”
The city’s glow had just started to replace the sun as we approached the Downtown section. Floaters zipped across the overhead lanes between buildings, guided by hovering skylights. Downtown grew brighter as we pulled away from the towering shadows.
Leaving the Flats is like turning the page on a book. Downtown buildings are all art deco; ritzy works of classic architecture that wash the moldy taste of the Flats right out of your mind. Bright lights glittered from the windows of joints that never closed.
The covered sidewalks were crammed with residents going about their business or pleasure. Slick dames in furs and feathers. Movers and shakers, hustlers and players. Besides the wallpaper, the only real difference from the Flats was the price of your rags.
I needed information. Tommy was a hard mug to find, and rubes that went looking for him usually ended up feeding the fish in the West River. Still, I’ve made a lot of contacts in my time. In a place like New Haven, everyone owes someone a favor. And you’d better bet that one day you’re gonna have to pay up.
I figured it was time to cash in on Rat Face Ronny.

About the Author:
This is where I get the chance to explain myself. Listen very carefully because you can’t hear the written word. If you could, it would sound like keyboard clicks, with the ghostly echoes of typewriter strokes haunted by the soft whisper of pen or pencil intimately caressing the page.

I am a writer.

What I do with that occupation is hopefully captivate your attention for a few brief moments while you take a mental vacation from whatever it is that you need to escape from. I write the books I’d like to read, and hope that you might like to read them as well.