You are here: Home / Featured Books / The Vigilante Chronicles Omnibus by Natalie Grey 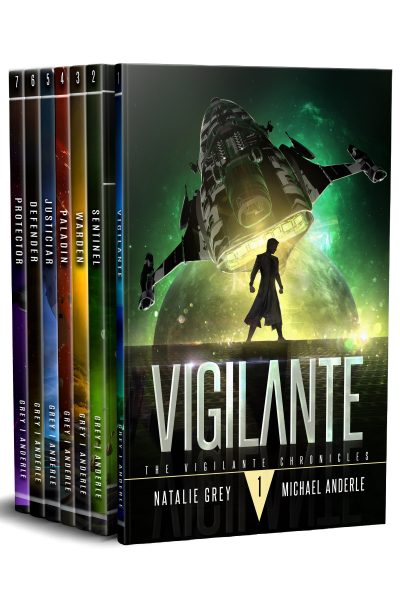 One man leaves the life of a lawman behind him and works to clean up a new area in space.

Grab this 7 book boxed set today learn what happens when a genetically engineered vampire leaves behind everything he’s ever known and sets out to clean up a new area in space.

Barnabas may not be Ranger One anymore, but one thing definitely has not changed: when someone screws over the powerless, Barnabas is going to bring the pain. With a bloodthirsty AI running his advanced spaceship, those who love evil should start looking over their shoulders.

On the planet now known as High Tortuga, the mine workers are far too close to being slaves so the ruler of the planet shut them down.

Except for the mine owned by Venfirdri Lan.

He’s taken his mine off the grid and decided to keep everything running. With no need to pay the workers, profits should be good.

After all, who’s going to stop him?

Someone sent three fully armed ships to High Tortuga to back the slave-owners running the mines, and Barnabas and Shinigami are determined to find out who.

And take them down.

As they look deeper, however, they’ll find traces of an organization that controls whole mercenary syndicates, industries, and even governments: the Yennai Corporation.

Barnabas has uncovered one of the biggest players in this sector, the Yennai Corporation.
Now he’s in for a surprise – it turns out that the alien who’s been pulling the strings against him is none other than Uleq, the Torcellan who escaped Bethany Anne’s clutches.

Barnabas isn’t taking any chances now. He’s going to find the Yennai Corporation’s main base and bring them down.

Barnabas has traced the influence of the Yennai Corporation from High Tortuga to their secret base, which he has destroyed, killing both heirs to the company.

Who hasn’t he killed? Koel Yennai, the patriarch and founder…who has sworn vengeance on Barnabas for killing his children and destroying his legacy.

Now, Koel gathers what remains of the Yennai Corporation to hunt Barnabas across known space and kill him.

And Barnabas is more than ready for the confrontation.

After taking down the Yennai Corporation, Barnabas has earned a little break.

On the way back to High Tortuga, however, he stops to answer a distress call.

How long could it take, after all?

Barnabas is about to find out. In what should have been an open-and-shut murder case, questions begin to pile up fast: who, exactly, was this Jotun Naval captain?

Decades of groundwork. Countless civilians abducted, experimented on, and killed. The perfect plan has taken shape, and soon, the entire sector will be under the control of the shadowy Committee.

That was the plan, anyway. But some human has decided to blow the whole thing up.

Barnabas has destroyed the Committee’s research facility, but his victory came at a cost: his friend Jeltor remains captive and brainwashed.

He isn’t going to stand for that. He is going to find and rescue his friend, no matter what it takes.

Buy the book, and follow the author on social media:
Get This Science Fiction Book From Amazon.
Visit the Author’s Facebook Fan Page.

Author Bio:
Natalie Grey grew up in rural New England, surrounded by a lot of vegetables and relatively little excitement. Therefore, she was obliged to make up excitement by pretending to be a knight, mage, jet-setting international assassin, jedi, or (occasionally) a shape-shifting dragon. She read everything she could get her hands on, from Lord of the Rings to Modesty Blaise, and eventually started writing her own stories full of what-ifs and snarky put-downs. Now she lives with her two German Shepherd mixes in the frozen wilds of Minnesota, and does a lot of inventive swearing while she shovels.