You are here: Home / Post-Apocalyptic / Winter Fall by Byron Tucker 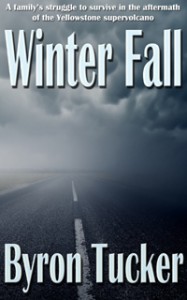 On August 1st, 2019, the Yellowstone Supervolcano erupts in its most cataclysmic eruption ever, unleashing a scene of destruction such as humankind has never seen and triggering a civilization-ending volcanic winter.

The Durant family, taking an idyllic vacation to Yellowstone on the eve of its mighty eruption, are forced to fight for their lives as they make a hair-raising escape from the exploding supervolcano. They’re able to reach a place of relative safety at the homestead of a relative, only to realize their struggles are just beginning …

Join the Durants as they embark on an epic, hard-fought struggle for survival against all odds in a ruined, frozen landscape beset by hunger, lawlessness and civil war.

What Inspired You to Write Your Book?
My love for apocalyptic / post apocalytpic fiction, especially of the natural impact variety (Lucifer’s Hammer, etc) plus my fascination with supervolcanos inspired to write my first novel.

How Did You Come up With Your Characters?
I based them on people I know in real life, as well as favorite fiction characters. I wanted them to be realistic as possible, to demonstrate what it’d be like to be subjected to a civilization-ending disaster.

Book Sample
Sam noticed Jimmy standing up and looking at the horizon ahead of him with a jaw-dropping stare. Stuffing the last bit of sandwich in his mouth, he said, “What’s the matter, Jimmy? Finally seeing some wildlife?”
Jimmy pointed with his finger, his mouth pretending to form words, but no sound came out of it. Annoyed that his son wouldn’t answer him, Sam swung his legs around and stood up so he could see in the direction of Jimmy’s open-mouthed gaze. For the next few seconds, his mind struggled to process what he saw. Over the distant, nearly cloudless horizon, a gray mushroom cloud expanded into the sky at a frightening rate of speed. He raised his finger toward it as Irene and Eliza stood up to gawk at the sight as well.
Irene spoke first. “Oh. My. God. Is that what I think it is?”
Jimmy spoke next. “It’s Yellowstone! It’s going off just like Uncle Ryan said it would!”
Just like Ryan said it would. It didn’t take long for the logic center of his brain to put two and two together, resulting in a horrible, sinking feeling in his stomach, combined with a paralyzing terror. Although they stood an incredible three hundred miles away, the eruption of the Yellowstone Supervolcano appeared stupendously huge, growing more voluminous by the second. He could hear no sound, except for the wind whistling across the landscape. There was nothing to feel underfoot, either, no earthquakes or any kind of vibration to indicate the cataclysmic eruption in the distance.

About the Author:
When not writing about apocalyptic diasters and whatnot, Byron does carpentry and woodworking, as well as traveling. He holds a degree from the University of North Carolina, and currently lives in Atlanta, GA.

Winter Fall is his first published book – with more planned for the future.