You are here: Home / Fantasy / Worlds Meet by Taryn Feldmann 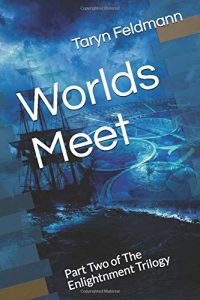 In Truth Come to Light the archaeologists discovered the truth about an alien connection with ancient civilisations. in Worlds Meet the aliens arrive just as World War Three breaks out on Earth. The Atlanteans are tentacled aliens from planet An and they created humanity thousands of years ago to mine gold and now they’re back to save humanity. The Atlanteans have a history on Earth, the good brother King Plato ruled over Egypt and the bad brother Volko ruled over Atlantis with his wife, a mermaid. Volko produces a heir King Aquarius – half alien and merman. In the future, King Plato fetches his nephew from the underworld city Poseidon. King Aquarius is needed to fight evil. Dr. Paige Williams and her friends join King Plato the tentacled alien to planet An. During training King Aquarius meets a siren princess, Oces from a water world and an ice princess, Tenasha from a frozen world. The two princesses join Plato, Aquarius and Paige on the battlegrounds on Earth. The battle is won but evil comes back to life. There is a solution – a galaxy princess who is the chosen one. Paige is the mother of the chosen one and Cassiopeia (galaxy princess) will train to win the battle of evil in the next chapter. Worlds Meet is a story of good vs evil and an imagination of different worlds in a vast galaxy. Aliens, princesses and mermen and sirens come together to fight evil. Can good rule the universe?

What Inspired You to Write Your Book?
I went on an archaeology dig and it inspired me to write about archaeology and an alien connection. I was also inspired by gods and merman mythology.

How is writing Science Fiction different from other genres?
SciFi lets writers express their imagination and writers can write out of this world things.

How Did You Come up With Your Characters?
Imagination, T.V characters.

About the Author:
Taryn Feldmann is an author and university student. She’s studied journalism, creative writing, and Archaeology. Taryn has always been fascinated with the ancient past and is an ancient astronaut theorist. She believes aliens exist and that there was an alien connection with ancient civilizations. She likes mermaids and fairies and loves to write about ancient myths. When she’s not writing novels, Taryn likes to binge-watch shows on Netflix and watch Ancient Aliens. She lives in Adelaide, Australia with her fiancé and cat, a blue Burmese named Bronte.