You are here: Home / Archives for scott baron 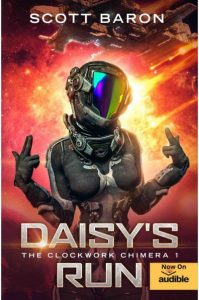 Daisy's Run: The Clockwork Chimera 1 by Scott Baron Rudely yanked from cryo-sleep, Daisy woke to find herself on a burning ship in deep space, and among a crew of modded humans, no less. Her life had just become a whole lot more complicated. And it was only going to get worse. As if the creepy cyborg and the mechanically-enhanced human crew weren’t bad enough, what was supposed to be a simple flight home to Earth was going horribly wrong. A deadly plot was unfolding. One that could … END_OF_DOCUMENT_TOKEN_TO_BE_REPLACED