You are here: Home / Archives for W.D. Nash 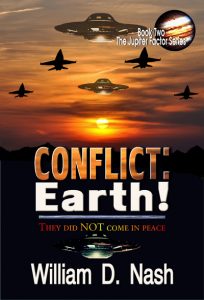 Conflict: Earth! by William D. Nash OVER 1 BILLION PEOPLE DIED FROM AN ALIEN SNEAK ATTACK! Ufologist Jack Slater needs to convince world leaders that they must forget historical differences and unite to withstand a looming alien threat. Jack races through space and time in search of advanced technologies that will help save the planet. If he doesn’t find what he’s looking for, Earth has no hope of defeating not one, but three hostile alien races. Along the way, Jack discovers answers to … END_OF_DOCUMENT_TOKEN_TO_BE_REPLACED