You are here: Home / Science Fiction / The Binding Volume 1 by John Parham 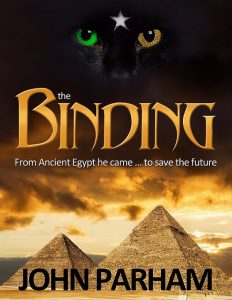 New Orleans is ground zero for the Russian Mafia’s most sinister plot yet. They plan to release a Nano virus that mutates food crops but requires one missing vital component… water. Thankfully for them, The Big Easy has plenty of it to spare.
A band of unlikely heroes joins forces that include a 5,000-year-old Starman, a sarcastic, telepathic cat, the last Voodoo Queen in New Orleans, and a motley crew of Cajun ex-military that must fend them off or watch as America’s crops are destroyed from coast-to-coast.
Follow their wily adventure as they battle the Russian Mafia in a fight to control America’s crops and destroy financial markets.
Will these determined and unfettered allies fend off disaster, or are the Russians too powerful an opponent to defeat?
With amazing powers, volatile personalities, and more drama than a soap opera, this crew of unlikely allies must achieve the impossible. Can they do it without creating another disaster?

What Inspired You to Write Your Book?
Walking a Florida beach, thought of my black cat, and wondered "What if".
What if she had telepathic powers, and she could levitate objects. And "What If" she was 5,000 years old?
From that, a walk on the beach and The Binding Volume 1 sprouted to life!

How is writing Science Fiction different from other genres?
If you can imagine it, it shall be.

How Did You Come up With Your Characters?
I am full time in a motorhome, my wife (Mindy) and I travel with two cats, Juno and Loco.
Juno became Bastet, the 5,000 year old cat, and Mindy became the last New Orleans Voodoo Queen, Mama Mindy.
Starman Jim was based upon an uncle from my childhood and TZ is a best friend of ours. Neurotic Jerry, well he just materialized.

Book Sample
Mamma Mindy interjected, “Jerry, something catastrophic is about to happen. I can sense it as Bastet can, and at this point, it is undefined. But it is coming and soon, bringing destruction and death with it.” Continuing, she asked Jerry, “Have you not found it strange to be traveling with a telepathic cat with the ability to levitate?”
Jerry responded, “Yeah, I have noticed a few strange things. Let’s see, getting a promotion at work I wanted but did not have the chance to fulfill the job.
“What else? Oh yeah, I jumped out of a third-story bathroom window with a levitating cat perched on my shoulder and didn’t get hurt.”
“Is that all? No, let me see—a lunatic killer chased us, we danced around a stripper’s pole at a busy intersection, and swam in a fish bowl in the basement of an abandoned building.”
“Surely that’s all. No, wait a minute.”
He continued, “Then we met a shaggy bear of a man who knew Uncle Jim McNutt who worked on their family farm. This was the same Uncle Jim who worked on our farm. He has the unique ability of not aging, and he has the same eyes and birthmark LB and I have. It appears you and the cat also have similar characteristics as we do; the whole community down here probably does.”
“Beyond that, everything is normal and A-ok. Hell, telepathic cats are practically running the mayor’s office,” Jerry finished.

About the Author:
John Parham was born in California in 1949, lived in Arkansas most of his life and now retired to the sunny beaches of Florida. He has been a cherry picker, welder and CEO of a technology company and now an author.

He graduated with a BA in Journalism and has written his first novel, The Binding Volume 1. He also wrote the Cat Chronicles by Bastet Short Story Collection. One of the short stories, The Town That Dreaded Halloween, won the 2018 Halloween Special Edition AIARWIP podcast.

Married to Mindy for twenty-five years, they travel full time across the US in a motor home with two independent cats, Loco and Juno. Juno was the inspiration for Bastet and no Mindy is not an actual Voodoo Queen!

The past 50 years he has been known as Crazy and think his nickname goes well with his stories!