You are here: Home / Science Fiction / The Rendering by William Mangieri 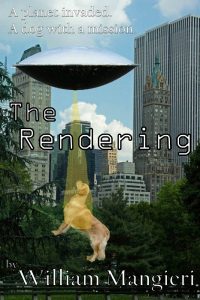 Alien invaders have scourged the earth. As they continue to hunt down and render the rest of humanity, an unusual golden retriever wanders the broken world on a mission. Angel is ready to give the aliens more than they have bargained for.
“The Rendering” is a speculative fiction short story.

What Inspired You to Write Your Book?
I could say that this was based on a writing prompt, but that only caused the inclusion of a couple of elements. I needed a story to build around the shrine in the beginning scene, so I went with an alien invasion as the cause. Things are

How is writing Science Fiction different from other genres?
You have the freedom to design your own world – to make things up more than in genres that are closer to home. But once you design your world, you cannot break your own worlds.

How Did You Come up With Your Characters?
Knowing that I was dealing with a highly successful alien invasion in which man was being beaten badly, it seemed natural for Man's Best Friend to have a role in saving him.

Book Sample
The German shepherd stared at Angel, noted how the odd retriever had slipped once again into a non-dog state. She did not belong with the pack. He heard a hover-ship approaching, so he brushed past the other dogs and then led them north through the piles.
Angel took no note of their departure, unaware of anything until the letters entered the intersection where those others’ memories had been placed, and she heard them shout in the voices of Mabel and her companions in the home, reading that one word: “Rejoice!”
That word was one of celebration. To Angel and her implant, it could only mean that the girl had been taken somewhere safe, somewhere with others to care for her. If Angel could find the girl, there would be more humans with her. She needed to find more.
The hover-ship came in from the south. It passed low over the shrine, kicked up a cloud of dead flowers as the Renders took in what was there, and then turned west. They were singular in their purpose, Angel reasoned, always on the hunt, and they may have had a read on other humans – maybe even on the girl herself. Angel barked, while Mabel’s voice shouted in her mind, but neither drew the Renders’ attention.
Angel followed the distinct chemical scent the hover-ship had left in its wake, into the relatively undisturbed suburbs outside the city. The Renders’ destruction had not extended beyond larger concentrations of humans – they had ways to extract what they wanted without flattening smaller buildings. Too much concrete blocked their scans and meant ruin of a different sort for those who hid there.
In a small, abandoned town beyond the city’s encircling highway, Angel caught up with the ship at last. It hovered alongside a building of concrete, glass, and steel, the town’s tallest building – a ten-story office complex that towered over an adjoining parking garage. She watched the red bars of their scanners slide up and down the walls, always returning to a floor near the top.
When the light turned to green, she was sure they had found someone. No! You need to take me! she barked, and she leapt directly under the ship so if they couldn’t hear her barking of her thoughts, at least they could see her and maybe they would get just close enough for her to – but then the green ray shattered the building, and she was caught in a cascade of debris that crushed one of her hind legs, and then silenced her thoughts.
She woke with someone talking to her, almost singing, and she opened her eyes just enough to see it was a kid. He wrapped his arms around her – he smelled vaguely of pizza. She hurt all over, and she didn’t want to move, but the kid didn’t ask her. He was stronger than he looked; he laid her across his bike’s handlebars and started peddling. Angel wanted to see where they were going, but the pain made it so much easier to just close her eyes.
She woke as she was lifted again, set in a soft nest of clothing in the concrete depths of a parking garage. He hummed as he covered her with an old ratty blanket that smelled of moth balls and reminded her of Mabel and the home. She greedily lapped water from the pie pan he held for her, and nibbled at the cold scraps of pizza crust he fed her.

About the Author:
William Mangieri is a blogger, karaoke junkie, former theater student, and recovered wargamer, who spends a lot of time wondering 'what if…' He writes from Texas where he lives with his wife and teh ghost of a nine-pound westie, who protects them to this day. His fiction can be found on Smashwords and other online sellers, and you can follow him on William Mangieri's Writing Page at https://williammangieri.wordpress.com, on Facebook, or on Twitter @WilliaMangieri