You are here: Home / Romance / The Soulmate Call by Tiffany Ann 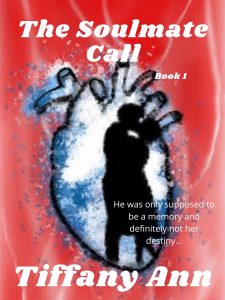 Lisabeth Gilbert was a young ordinary college student determined to guard her heart. Her heart was meant for one person only. Little did she know that her soul had already found the one. During a chance encounter on campus, Lisabeth sees the one her soul had claimed. Her soul instinctively takes control and calls out to his soul tying their souls together for eternity. Rey Turner’s family discovered the soulmate call generations ago. Rey knew who his soulmate was, but refused to accept her because she was a virgin, waiting for marriage. He was a selfish fool, more willing to let the other half of his soul walk out of his life, than to honor her by waiting for marriage like she desired. By the time he had come to his senses he had pushed her out of his life. He believed he was destined to live without the one created just for him, but he was wrong. The moment their eyes met again, her soul took over and called his. Afraid to lose her again, his soul responded to hers without hesitation.Will Lisabeth forgive Rey and accept the soulmate call? Will Rey have the strength to love, honor, and cherish her as she desires?

Targeted Age Group:: 17 and up

What Inspired You to Write Your Book?
I wanted to write a series where humans were able to communicate telepathically. This is my version of how it could be possible.

How is writing Science Fiction different from other genres?

Book Sample
I walked through the auditorium doors with Daniel. I paused because sitting in the back row with his body turned around in his seat, looking at something outside of the doors, sat Rey. Then he moved towards me and my brown eyes met his brown eyes. I’m suddenly hit with a giant tidal wave of feelings. A wave of emotions I had never felt before. If Cupid really shot people in the butt with arrows, they hit mine. It felt a lot like love at first sight, or should I say love at first re-sight. It felt possibly, like my soul took over by taking a sledgehammer and utterly destroying any wall or barrier I had ever built around my heart. Out of nowhere, the first thought in my head surprised me. “I love you, Jeffrey Turner.”

Rey never took his eyes off of mine. His gaze so intense I could feel it. I knew I did not see him open his mouth to speak, yet I knew with every fiber of my very being I heard him say, “I love you too, Lisabeth Gilbert.”

Impossible, or crazy, came to visit me. I heard him say it in my mind. So shaken up, I nearly tripped going down the stairs while my mind spun. Rey jumped up to grab me by the elbow, and he pulled me close to him. While still looking me straight in the eyes, I heard in my head, “You are not crazy.” This time he opened his mouth and asked, “Can we go outside and talk?”

About the Author:
After more than twenty years of dreaming and telling my stories in my daydreaming, I am putting my stories to paper to share with anyone whose heart believes in true love. I have been married to my true love for twenty years.

I was born and raised right outside of New Orleans, Louisiana. I am extremely proud of my Louisiana ancestry. My father's family settled in the village of Buras, Louisiana eight generations ago. Having been given land grants by the King of France they made their way across the ocean to settle in a land that is nearly gone due to the ravenous hurricanes that are relentless.

I studied English at the University of New Orleans, while dreaming of the day that someone would read one of my books.

After giving birth to my first child I decided to focus on being a mother, which became the most important job to me. I am the mother of four teenagers, two girls and two boys. Life is an adventure with each and everyone of them every single day.

With the kids growing up, I went back to work. I sought a job that would allow me to be there for my family and accomplish my dream of writing. I work as a night auditor in a hotel. It is my home away from home. It is a simple job that allows me the freedom to bring you my stories.

I spend much of my free time in my community. I hold an elected office in my community, serve on several boards, and am a co-founding member of an annual event that brings awareness to the local non-profits in my home town. These are just a few of the things that I enjoy in my spare time. I believe, "Influential leaders don't set out to be a leader….they set out to make a difference. Its never about the role-always about the goal."

My characters and stories are fiction , however, my favorite movie is The Princess Bride and my favorite book is Wuthering Heights.