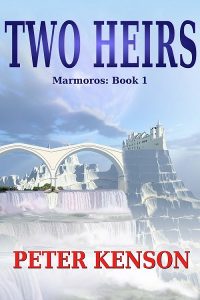 Two royal heirs from different racial and cultural backgrounds. One is a visionary leader of an outcast race, determined to unite his people and reclaim their ancestral homeland. The other was long thought dead after the royal family was massacred during a planetary invasion. The recent evidence that the heir still lives, threatens to disrupt the smooth running of the Empire.

David Held, a top agent in the Imperial service, is sent to find and protect the missing heir from agents of the occupying forces, desperate to consolidate their hold on the conquered planet and prevent the heir returning.

The trouble is the Empire (nearly) always fights by the rules. To avoid technological contamination of a less advanced society, Held is denied his usual array of hi-tech equipment and even has his memories altered to fit the local environment. Faced with an enemy unconstrained by such ideological considerations, he has one hand tied behind his back.

As the fates of the two young heirs become increasingly intertwined, can the race to find the one, help to fulfil the ambitions of the other? Or will both be destroyed by a ruthless enemy who has no qualms about bringing advanced warfare to a pre-industrial society?