You are here: Home / Post-Apocalyptic / Demons & War by E.M. Kelly 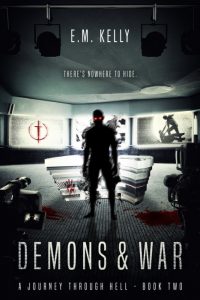 There’s nowhere to hide.
The time of the virus has passed, but war now looms on the horizon.
Compelled by fear, an injured Drew Murphy, tormented by his own demons, is determined to get home to save his family from the vilest of mankind.
Hundreds of miles away Annabelle Murphy must fight to save her young daughter and elderly mother. She will be tested like never before and will have to do the unthinkable in order to survive.
Meanwhile, news anchor Glen Daniels has arrived in New York City and has become the face of the country as it rebuilds. Evil has returned and is prepared to release War, the second Horseman of the Apocalypse. Possessing anyone in its path, his plan will stop at nothing to destroy humanity.
Can Drew and his newfound friends stop the aftermath of the ominous entity and survive the most devastating war the world has ever seen?

Don’t miss this exciting continuation to E.M. Kelly’s award-winning novel, Addiction & Pestilence, from his A Journey Through Hell series.

What Inspired You to Write Your Book?
I've always drawn to and wanted to write about post-apocalyptic stories. I think it has a lot to do with survival and pushing all known boundaries to live.

How is writing Science Fiction different from other genres?
SciFi allows you to use your imagination and not be boxed in. If you can think it, you can write it.

How Did You Come up With Your Characters?
I based them upon people I know and how I thought they would act when thrown into the apocalypse.

About the Author:
E.M. Kelly is a former Marine Corps Reservist and Emergency Medical Technician (EMT) in Boston. Being an avid reader one of his lifelong dreams was to write a novel. Finally, he put "pen to paper" as his wife had long ago suggested and fulfilled his dream in 2018 when he released his first novel, Addiction & Pestilence – Book One of his A Journey Through Hell series.
This post-apocalyptic horror thriller is a modern retelling of the Four Horsemen of the Apocalypse which has won five awards, including Readers' Favorite bronze medal for Action and the coveted Readers' Favorite 5 Star Reviews. E.M. is known for writing riveting fiction highlighting gritty, raw and real characters.
He can usually be found reading a book, and that book will more likely than not be a thriller of some sort.
At night he is absorbed in creating his newest page-turner and just released his second novel, Demons & War, in February of 2021. Currently he is a billing supervisor for a large Boston hospital, and he lives just south of the city with his loving wife and daughter.